What many of us know today as a fun, spooky holiday has roots deep in Europe’s agricultural past. Halloween has a long, storied past, and the holiday that we celebrate on October 31 each year in the United States has pre-Christian origins, a time rooted in myth, lore, and legend.

Although the origins of Halloween remain somewhat murky, some authors have acknowledged that Pagans and Druids in the British Isles probably celebrated Halloween as the exact day between the Autumn Equinox and the Winter Solstice. According to author Mickie Mueller, the oldest written records of this pagan festival were from the early Middle Ages. In addition, October is a time of contrasts: It is a “sad and beautiful time,” as author Diana Rajchel puts it.

“In the fifth century, Pope Boniface attempted to repurpose the ritual of honoring otherworldly spirits and the dead, identifying it as a day to honor saints and martyrs,” the author writes. “When the late October/early November fire festivals continued anyway, in the ninth century Pope Gregory decided to move the saints and martyrs day back to the same day as the secular festival of the dead.”

According to Rajchel, different areas of the British Isles contributed to various aspects of Halloween lore. In Scotland, for example, ancient stories of the Wild Hunt were widespread, and the “Scottish added to this legend’s atmosphere with tales of unbaptized infants wandering the woods at night. According to author Judy Ann Nock, “Samhain is the night of the ‘wild hunt,’ a notorious and rambunctious ride when scores of faeries come racing out from within their hallow hills to wreak havoc throughout the towns.”

In Ireland,” Rajchel writes, “the poor went door-to-door ‘mumming’ or ‘souling.’ They offered songs and prayers for the dead. As payment, the owners of the homes visited gave them soul cakes, cookies with a cross drawn on the top, representing each soul in purgatory.”

This type of soul-caking was the roots of trick-or-treating.

Overall, Halloween (or Samhain) is described as a “magical time when the veil between the worlds of the dead and the living is thin, and . . . we celebrate death as part of life, and to give positive value to the idea of going into the dark,” writes author Ann-Marie Gallagher. Finally, Halloween is a modern American holiday with a long and storied past, filled with legends, mystery, and stories. 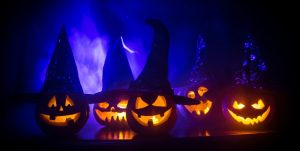