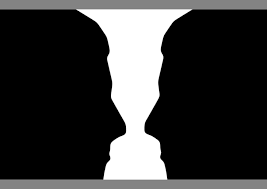 How does human perception work?

Certainly one could provide a biological account of the anatomy of the human eye and it’s component parts. But that’s not what we mean. We mean, how is it that our minds make meaning of the objects that our eyes observe?

This is one of the main questions asked by the Gestalt psychologists—a school of psychology that emerged in the early 20th Century—a way of thinking that hasn’t completely been relegated to an out-of-date historical curiosity.

“On a train speeding through central Germany late in the summer of 1910, a young psychologist named Max Wertheimer stared at the landscape, intrigued by an illusion millions have taken for granted but that he felt, at that moment, required an explanation. Distant telegraph poles, houses, and hilltops, though stationary, seemed to be speeding along with the train. Why?”

So as one of the founders of gestalt psychology, Wertheimer termed the word “gestalt” to mean, according to author Morton Hunt, “form, shape, or configuration.” At the core of this school of psychology is the question of how humans make meaning and perception out of the world. “The mind interprets the sensations to mean what it knows it to be,” Hunt writes.

To test gestalt psychology, there are many famous tests, such as “The Muller-Lyer Illusion,” which shows two lines placed next to each other, but the lines differ in that one has “arrows” point out, while the other have arrows point in. The illusion is that the main shaft lines look like one is longer than the other, but they are, in fact, the same length. There are other tests that are similar such as the “Rubin Vase,” which show two heads facing one another. But the image can be taken to look like either a vase or two faces looking at one another.

Gestalt psychology became a major force in Germany before and after WWII, and it eventually made its way to North America, too. What’s interesting here is the impact this thinking has had on art. Different schools of art have used gestalt psychology both as a philosophical approach to painting as well as a teaching tool for students.