It’s the end of October, and that means Halloween is here.

And while many of use may carve a pumpkin, go trick-or-treating, or decorate our homes with ghosts and goblins, few people may know that – although many of our most cherished Halloween traditions have more modern roots, the holiday itself is very ancient.

In many ancient European societies, Halloween would have been known as “Samhain” – a Gaelic word that’s pronounced SOW-win. Historically, this was a time of the year when farmers would be finished harvesting their crops, excess livestock would be slaughtered, and preparations for the long winter ahead would begin. And, of course, myths, legends, and lore also became infused with the year’s final harvest.

“Many Pagans believe a membranelike veil separates the world of the spirit from the physical world and that it thins most in late autumn,” writes author Diana Rajchel. “Things pass through that membrane,” she continues. “Those things might be spirits, faeries, or even the departed ones we wish so much to see again.”

Moreover, one reason Halloween and Samhain falls on October 31st is because that time marks the halfway point between the Autumn Equinox and the Winter Solstice. Although Samhain’s historical roots go back into the mists of pre-history, by the time the Christian era arrived in Europe, many individuals within the church’s authority did not look kindly upon Samhain.

“[I]n the ninth-century Pope Gregory decided to move the saints and martyr’s day back to the same day as the secular festival of the dead,” Rajchel writes. “[T]he church resorted to declaring November 1 “All Saint’s Day.”

Indeed, the Catholic Church would, over the many centuries it hung onto power in Europe, continue moving and declaring holidays in order to out-compete their pagan counterparts. But despite its best efforts, the Church could not completely quash out Halloween. It continued to grow and change over the centuries.

The secular holiday of Halloween in the United States is a product of the early twentieth century. It wasn’t until then when Americans began holding parades, dressing up in costumes, and trick-or-treating. But it’s important to remember that these traditions – traditions that are part and parcel of the holiday as we think of it now – have agricultural roots that date back to the time of pre-history. 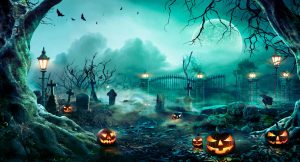