In the last decade, more and more states have legalized the use of medical marijuana, including Pennsylvania. And most people do not know, that in the decades before the U.S. government decided to make all forms of the plant illegal, marijuana was used medicinally for thousands of years. In fact, the Greek “Father of History,” Herodotus, documented the first records of marijuana use in 440 BC. But some historians think that the use of marijuana goes back to the beginning of human civilization, some 10,000 years ago.

More recently, marijuana stigma began in this country in the 1930s. Propagandistic films like “Reefer Madness” (1936), and laws such as the Marijuana Tax Act of 1937 helped to push the drug to the fringes of society. The real death nail, however, occurred in 1970 under the Nixon Administration, when the “War on Drugs” was declared. Subsequently, arrests soared, and prisons were crowded with individuals for merely possessing small amounts of the drug. The 1970 Controlled Substances Act placed marijuana in the Schedule 1 category, meaning that the government thought that it had no medical benefits and that they thought the substance had the potential for abuse. Currently, although many states have legalized marijuana for both medical and recreational use, it remains illegal under federal law.

As of 2018, however, more than 30 states have voted to make medical marijuana legal – despite the federal government’s ban.

Some of the many things that medical marijuana is used to treat are:

Going into the deep science behind how marijuana works is outside of the scope of this article; however, two of the most famous chemical compounds contained within cannabis are THC and CBD. Generally speaking, CBD, or “cannabidiol,” is a chemical compound that does not contain any psychoactive elements, and it is use for a wide array of medical ailments. THC, or “tetrahydrocannabinol,” is the psychoactive part of the plant that interacts with the brain’s endocannabinoid system. THC is the chemical compound that is still considered illegal under federal, although – again – many states have a different opinion. Some strains of cannabis have different amounts of CBD and THC, and – medically speaking – it depends what the patient’s needs are . . . whether they use a strain high in CBD or THC.

Finally, if you feel that medical marijuana might be a good option for you, go through the proper channels. Consult a doctor who is licensed. 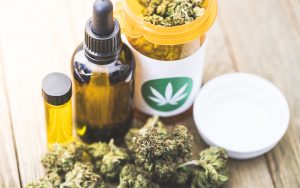