What Makes an Effective Therapist? 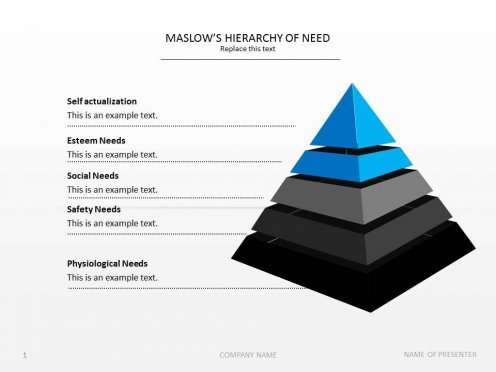 Known for his “Hierarchy of Needs,” Maslow helped to distinguish himself and his ideas from the dominant trends in mid-twentieth century psychology: Freudian psychoanalysis and behaviorism. Tom Butler-Bowdon, a popular psychology writer, put it this way: “Maslow originated a ‘third force,’ humanistic psychology, which refused to see human beings as machines operating ‘in response to environment’ or as the pawns of subconscious forces.”

In other words, Maslow’s ideas painted a different picture of the individual, a picture that—although novel at the time—resulted in a unique, more creative interpretation of how human beings actually are.

Self-actualization: One Step at a Time

Self-actualization, as put forth by Maslow, is not just an abstraction. It remains a tangible goal, one that is achievable through a series of steps. The following is a list of Maslow’s classic Hierarchy of Needs:

In order for an individual to progress toward the goal of self-actualization, he or she must move through a series of “lower” stages, stages such as “safety” and “love/belonging.” “For [Maslow],” writes Butler-Bowdon, “[self-actualization] was not a case of ‘one great moment’ like a religious experience.” Rather, achieving self-actualization was a matter of putting into practice practical habits, such as “awareness of life as a series of choices” and “deciding to be honest, and as a result taking responsibility for what you think and feel.”

Self-actualized individuals may think and operate differently. As part of his original research, Maslow studied so-called “exceptional individuals” such as Albert Einstein. The goal, then, is not to be “blissed out” around the clock, but rather, the goal is to—put simply—make better choices, achieve self-awareness, be honest, and make the most of your abilities. Viewed this way, self-actualization becomes a series of broken-down habits rather than a euphoric mystical experience.

As noted, Maslow’s ideas contrasted with the prevailing trends in psychology initially. For instance, the behaviorism/positivist approach refused to acknowledge any phenomenon unless it remained observable and measureable. Hard-nosed positivists, in psychology as well as in other areas of science, remain unimpressed by Maslow’s seemingly lofty goals of self-actualization. (How can one measure a “self-actualized” person?) On the other side of the psychological spectrum were those advocating Freudian psychoanalysis—a panoply of ideas that, when boiled down, assert that the behaviors observed by behaviorists/positivists were really just driven by subconscious impulses.

This was the state of psychology for many decades until researchers like Maslow emerged to break the gridlock.

Human beings, Maslow asserted, were neither completely the product of their environments (as behaviorists maintained) nor the consequences of subconscious impulses (as psychoanalysis asserted). For Maslow, humans possess a potential for creativity and agency. It remains an individual’s obligation to realize this potential.

Self-actualization and its Applications

In the years after Maslow published his original ideas, his approach to psychology has been applied to everything from business to education. Indeed, it remains an attractive idea that individuals can improve their lives through their own effort and talent. Self-actualized individuals are not a mere idealized fantasy. In business and educational contexts, then, these are the sort of individuals who may succeed and innovate.

In an era of dubious self-help personalities, the ideas of Abraham Maslow remain an authentic and original voice. His ideas are empowering; they challenge us to rise above the determinism of behaviorism and psychoanalysis. Moreover, Maslow invites us to master ourselves as a way of attaining self-actualization. By moving beyond our immediate psychological needs, we move toward self-actualization.