Since at least the 1980s, research psychologists have recognized a concepted—“fantasy proneness’’—which is a trait where individuals tend to get lost within their own imaginations, to put it simply. More interestingly, however, fantasy proneness has been looked at from many different angles including from psychological, media, and even legal perspectives.

A few decades ago, “investigators discovered a fascinating group of individuals alternately described as ‘fantasy–prone persons,’ ‘fantasizers’ and ‘fantasy addicts’ among the excellent hypnotic subjects they interviewed. Fantasizers reported frequent, intensive fantasizing,” the researchers write, “when engaged in non–demanding tasks and . . . reported a longstanding history of imaginative involvement in reading, play activities and mystical/religious experiences.”

One interesting dimension of fantasy proneness is that, according to research, fantasy prone individuals tend to score higher on measures of the Inventory of Childhood Imaginings (a tool used by research psychologists to measure childhood imaginings). Again, in the early 1980s, researchers “. . . determined that so–called ‘fantasy–prone persons’ who scored in the upper 4% of the population on the Inventory of Childhood Memories and Imaginings, could be distinguished from less fantasy–prone subjects on measures of absorption, imagination, hypnotizability and creativity.”

Interestingly, too, individuals who score higher in fantasy proneness do not have higher rates of mental disorders than the general population. “In contrast to what was believed until a few decades ago,” researchers note, “recent studies have consistently shown that a substantial percentage of those who report anomalous or unusual experiences such as psi phenomena or hallucinations do not evidence greater psychological dysfunction than the population at large.” Although, it is also worth noting that “. . . some anomalous experiences such as hallucinations are considered diagnostic of mental disorders and believers in paranormal events are not infrequently assumed to be socially marginal and/or have some type of cognitive deﬁcit.”

Finally, as a psychological construct, fantasy proneness in individuals may help enrich storytelling, and individuals with this trait likely had strong imaginations in childhood that carried over into adults. 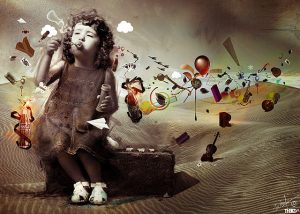