Family & Friends: How to Help Someone with Depression

The long summer days that sit between the Fourth of July and Labor Day in the United States are sometimes called “the dog days of summer.” This time is marked, usually, by hot weather, long days, thunderstorms, picnics. . . and the reminder that summer doesn’t last forever. Indeed, until recently, I was not aware of the ancient festival, “Lammas,” which takes place on August 1, marking the midway point between the summer solstice and the autumn equinox.

Personally, for me August always has always had a different subjective feeling than the rest of the summer – a feeling I could never really put my finger on until recently. For starters, the light in August always seems different. This is because the sun reaches its zenith and the days are longest around the summer solstice, or the end of June. From there, we actually begin losing time (Yes, as early as June!), but the loss of daylight happens somewhat slowly, so it isn’t perceptible for several weeks. . . until August. The sun’s light in August is so distinct that it’s said that the American author William Faulkner named is famed novel, “The Light in August,” after his wife’s observation that the light in August always seems. . . well, different.

This fact was not lost among the ancient peoples – namely, the druids and celts, who at one time inhabited northern Europe.

“The ancients held great feasts in [the sun god Lugh’s] honor, which were also linked to the pagan festival Lammas,” author Alison Davies writes. “This celebration marked the first harvest, known as the grain harvest, and was a time to give thanks for an appreciation of wheat.”

So, in other words, astronomically not only does August 1 mark the halfway point between the summer solstice and the autumn equinox, but it also marked the first of three harvest festivals. (The other two being the autumn equinox and a celebration called, “Samhain,” or Halloween.)

“Bonfires were lit, and circular dances performed, in a nod to the sun’s passage through the sky,” Davies writes. “Lugh, in guise as John Barleycorn, the spirit of the grain, is sacrificed when the corn is cut, but reborn in the seed sown for the following year’s harvest.”

Surrounded by folklore and ancient agrarian traditions, August is a time of change and anticipation. By August 1, there are still technically six weeks of summer left, but these are the waning days of summer. Nights may begin to cool down, the green in the leaves begin to fade, and signs of autumn begin to slowly appear.

So, celebrate Lammas this year, and mark the beginning of summer’s end. 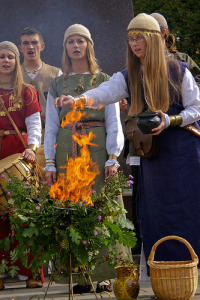