Body Words: How to Make Sense of Body Language

For years, some individuals have pointed out the similarities between Buddhism and western psychology. Of course, no comparison is completely analogous, but because Buddhism places a great amount of emphasis on the mind, there are some interesting parallels to western psychology.

One of the first things to point out that like all of the major world’s religions, Buddhism is not one single set of ideas per se. There are different types of Buddhism, including Zen, Tibetan, and so on. Many of the aspects of Buddhism that this article will focus on will be true of Buddhism in general, as these ideas do not belong to any specific branch of the religion.

To begin, as author Geshe Kelsang Gyatso writes, “Happiness and suffering are states of mind, and so their main causes cannot be found outside of the mind. If we want to be truly happy and free from suffering, we must learn how to control our mind.” This passage can be hypothetically superimposed in a book on cognitive behavioral therapy (CBT), and no one would really know the difference. Moreover, generally speaking, Buddhism places a lot of emphasis on suffering, or, more preciously, on how to avoid suffering.

According to Buddhism, much of human suffering comes from desires, cravings, and illusions. Learning to control our needs, wants, and desires is the key to avoiding suffering. Similarly, as pointed out above, CBT – a form of psychological therapy that is widely used – also aims to focus the mind on “irrational thoughts”—a set of beliefs that, fundamentally, distort the way we think about things.

Finally, another central idea to Buddhism is the concept of time – or, rather, the idea that the present moment is all there is. This notion has been widely used in different forms of western therapy. Often times, clients will focus on and worry about their jobs, bills, what will happen next week, next month, or next year . . . the lesson that Buddhism provides us is that we can only control the present moment – and that’s all.

“Living each moment deeply, sustained concentration comes naturally, and that, in turn, gives rise to insight,” writes Thich Nhat Hanh. “When you are deeply concentrated, you are absorbed in the moment,” he concludes: “You become the moment.”

The parallels between Buddhism and western psychology run deep. 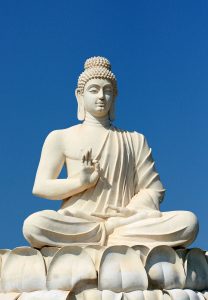