Although for most individuals, February 1 comes and goes without pause, it is a date of some significance: February 1 marks exactly the halfway point between the Winter Solstice and the Spring Equinox.

In the northern hemisphere, the general consensus is that once the holidays are over – especially in the United States – most people hold their breath until spring. And February 1 has marked an important date, which has been celebrated historically, a date that acknowledges a, albeit subtle, return to the light.

Also known as “Imbolg,” “Oimelc,” and the “Feast of St. Brigid,” Imbolic “is a time when life begins to awaken from its winter sleep and prepare for the warmer and longer days that are soon to start,” writes author Carl F. Neal. Neal notes how the ancient peoples of Northern Europe – “in the hinterlands of Ireland, Scotland, and other parts of Europe” – marked February 1 as an important date.

That said, however, it may be hard for the modern reader to imagine life without indoor plumbing, indoor heating, electricity, and the like. “Even as recently as two hundred years ago,” the author writes, “winter was a much different experience than it is today. Now imagine what it was like five thousand years before that.” Neal continues: “Winter can be dangerous for modern people, but the dangers cannot be compared to what our ancestors faced.”

Which is why Imbolic, February 1, was an important day practically and philosophically. Contemporary Earth-based spiritual traditions have sparked a renewed interest in marking certain important days of the year, such as Imbolic and the Summer and Winter Solstices, for instance, naming these dates and others as the “Wheel of the Year.”

Imbolic has Celtic roots, and, philosophically, it is seen as a time of renewal, rebirth, and change. Those who celebrated Imbolic, which “commences on February eve, or January 31, and usually concludes February 2, marked it by “the traditional lighting of candles, signifying purification, inspiration, and growing light.”

“We notice the lengthening of the days,” writes author Judy Ann Nock. “Although the weather is still wintry,” she writes, “there is no turning back on the journey of the sun’s return. Winter’s darkness begins to loosen its grip, and new beginnings are seen all around as spring approaches.”

Of course, on February 2, contemporary America marks “Groundhog’s Day,” which in some ways, echoes Imbolic. Although more of a secular tradition, Groundhog’s Day is in a way a modern, secular way to mark the coming of spring. It’s hard to acknowledge that the few days around February 1 have been, and are, an important moment to stop and recognize that, although there is still snow on the ground, spring will be approaching.

Finally, this year, the winter of 2020 – 2021, has been hard on a lot of people because of the global pandemic. But fear not: The light is coming. 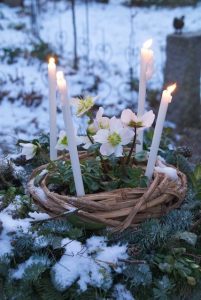