Christmas through the Ages

Hygge: Finding Comfort Indoors through the Winter and the Waning Months of the Pandemic

Christmas through the Ages

Most people know that the origins of Christmas go back thousands of years. Few people might not know, however, that many elements of our modern Christmas holiday date back before Christ.

“Long before the appearance of an obscure wonder-worker in Palestine, the celebration of the Midwinter sun held a central place in civilizations throughout the ancient world,” writes John Matthews, author of “The Winter Solstice.”

Cultures from the British Isles to ancient Rome all celebrated some sort of Midwinter observance. With regard to the latter, the ancient Romans celebrated “Saturnalia,” a festival that included a lot of food and drink and was celebrated until the fourth century, writes Matthews. Additionally, it wasn’t until 400 years after the birth of Jesus until December 25th was fixed as Christmas.

Before the Christian era and even during it, many independent traditions have sprung up the world over. The timing of fest ancient (and modern) traditions falls around the time of the Winter Solstice, which is on December 21 in the Northern Hemisphere.

According to author Judy Ann Nock, “[t]he word solstice comes from the Latin sol stetit, which means ‘sun stands still.’” She continues: “For six days around the time preceding and following the solstice, the sun appears to rise and set in the same place. The sleeping earth is filled with magic and mystery,” she writes, adding: “In addition to the advent of lengthening days, [the] winter solstice was the time when much of the work of the year was complete.”

This observable fact did not get ignored by the ancients. The days around the Winter Solstice were normally a time of celebration. Even well into the Christian era, “[t]he Christmas season used to stretch all the way from late October to February 2. Some of the observances during this time include: St. Barbara’s Eve (Dec. 3), Epiphany Eve (Jan. 5), and St. Andrews Day (Nov. 30). Some people who often complain about hearing Christmas music before Thanksgiving may not know that in different places and different historical eras, Christmas/Yule/Mid-Winter/The Winter Solstice has been a months-long celebration.

Although the modern Christmas season is a strange mix of religious, historical, cultural, commercial, and secular traditions, the common theme among all of it is – whether some people know it or not – the Winter solstice, or, the fact that this is the darkest time of the year. Although February is often cited as “the shortest month of the year,” December is actually the shortest month, not in terms of days on the calendar but in terms of the amount of sunlight there is.

Finally, no matter what holiday you celebrate, whether Christmas only means “Christ” to you, or if you observe another holiday, the end of December has historically been a time of mystery, observance, and celebration. As the 26th century poet John Donne called it, late December is, “The year’s midnight.” 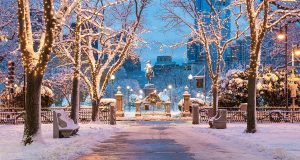