By now, news of the COVID-19 pandemic feels stale.

The pandemic first hit the United States in March 2020, and now, nearly two years later, the scourge is still with us. But the situation continues to change and evolve. Just this week, it was announced that 700,000 Americans have lost their lives to COVID-19 – surpassing the deaths of Americans during the infamous 1918 Spanish Flu pandemic.

The good news is that vaccinated individuals appear to holding out from the worst parts of the disease (although some breakthrough infections have been reported). Also, the recent Delta variant appears to have peaked in the United States, as new cases have flatlined or declined. But nearly two years into the worst pandemic in more than 100 years, many people are wondering: “How much longer is this going to last?”

The simple answer is that no one really knows, although there has been clear progress made against the pandemic since its onset. But the thing to remember is that if the virus exists anywhere in a human population, it has the potential to exist everywhere.

“One big early lesson was that no country can really seal off its borders anymore,” writes author Debora Mackenzie. Our society is global; our risk is global; our response and cooperation must be global.”

Once an infectious virus gains a strong foothold in a human host population, it remains very difficult to get rid of entirely, which is why some public health officials, epidemiologists, and virologists have said that COVID-19 may not get erased for good. The virus may, as some have speculated, establish itself as a seasonal scourge, much like the flu – a situation where COVID-19 may cause localize outbreaks, but does not remain the destructive force that it has been since 2020.

One, albeit depressing, situation would be if wealthy countries were able to vaccinate enough of their populations to create heard immunity, but the virus runs unchecked in poorer parts of the world. There’s some evidence of this situation happening already. Recently, it was reported that the average vaccination rate for all African countries stands at about 4%, whereas the vaccination rate in other countries remains much higher. If the virus finds a susceptible population to circulate in periodically, that means it won’t be stomped out, and at that point periodic outbreaks can become the norm.

As reflective of Mackenzie’s statement above, a virus doesn’t respect artificial human borders. All it “knows” is how to infect healthy human cells, regardless of geography.

Finally, again, it’s important to remember that all of the aforementioned situations are hypotheticals. No one really knows how and when preciously this pandemic will end. Will it end with a boom or a whimper? Hopefully, we will find out soon. 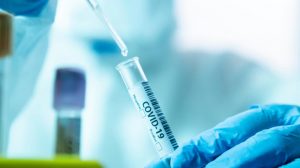 Mackenzie, D. (2020). COVID-19: the pandemic that never should have happened and how to stop the next one. Hachette Books. New York, NY.