Although the idea of the “mad genius,” has become trite and is not necessarily true, the idea that creatives—artists, musicians, writers, etc.—have higher rates of mental illness is not a cliché . . . according to author Kay Redfield Jamison, in her book, “Touched with Fire: Manic Depressive Illness and the Artistic Temperament,” creatives do have higher rates of manic depressive illness, which may explain how these artists may approach their outlook and like, and, quite possibly their work.

Famously, some of the oft-repeated examples are the poet Lord Byron, novelist Ernest Hemingway, and the painter Vincent van Gogh. According to Jamison, “Thinking can range from florid psychosis, or ‘madness,’ to patterns of unusually clear, fast and creative associations, to retardation so profound that no meaningful mental activity can occur.” She continues: “Behavior can be frenzied, expansive, bizarre, and seductive, or it can be seclusive, sluggish, and dangerously suicidal. Moods may swing erratically between euphoria and despair or irritability and depression.”

This is a description of the thoughts, behaviors, and moods of individuals who suffer from mood disorders.

It is sometimes romantically recalled that Hemmingway, for example, committed suicide, as did other famous writers, poets, and artists. But there is nothing romantic about it. Hemmingway’s mood disorder may have helpful fuel some of his great works, but it ultimately proved to be his demise. As Jamison notes: “Although manic-depressive illness is much more common in writers and artists than in the general population, it would be irresponsible to romanticize an extremely painful, destructive, and lethal disease.”

Finally, because creatives tend to experience more intense emotions, perhaps that does fuel some aspect of their work, but that is only speculation. It remains worth noting that, as Jamison points out, there is a kernel of truth in the “mad genius” hypothesis, but, as pointed out, a large subset—but not all—creatives do have mood disorders. 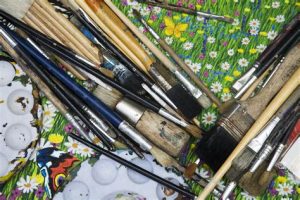