Wintering: How to Retreat when Times Get Tough

What characteristics make for a good leader?

This is a question that is studied in the classrooms of M.B.A. and organizational leadership programs all over the world. And although there are elaborate theories and constructs out there to help us understand what traits make a good leader, one often overlooked aspect is: What role does mental health have in creating good leaders?

This is the question that author Nassir Ghaemi explores in his 2011 book, “A First-Rate Madness.” In the book, Ghaemi profiles several high-profile leaders such as past presidents and examines how their mental state may have played a role in how they made decisions – especially during times of crisis. Yet some of the worst kind of leaders, Ghaemi argues, are ones that are “quite mentally healthy.”

“[T]he typical crisis leader is idealistic, a bit too optimistic about the world and self; he is insensitive to suffering, having not suffered much himself. Often, he comes from a privileged background and has not been tested by adversity,” the author writes. He continues: “[H]e thinks himself better than others and fails to see what he has in common with them; he doesn’t accumulate well to novelty.”

Ghaemi goes on to explain that the typical crisis leader, whether it be “the CEO, the department chief, your neighbor’s boss, the bank president, [or] the president” are “quite mentally healthy. [This kind of leader] has never suffered from depression or mania or psychosis. He has never been to a psychiatrist.”

Although it may appear counterintuitive, the best types of leaders are the ones who have faced adversity and have learned to overcome it. On the other end of the spectrum are individuals who are those who have never really struggled in their lives. As the author writes, this kind of leader’s “past has served him well, and he seeks to preserve it.”

To help explain this, Ghaemi cites the “Inverse Law of Sanity.” This law states that “when times are good, when peace reigns, and the ship of state only needs to sail straight, mentally health people function well as our leaders,” the author writes. “When our world is in tumult, mentally ill leaders function best.”

Diving a little deeper, “[f]our key elements of some mental illness –mania and depression—appear to promote crisis leadership” by these four qualities: realism, resilience, empathy, and creativity. Ghaemi says that those who are more mentally stable may lack one or more of these four qualities.

To conclude, although Ghaemi’s arguments about crisis leadership may come as a surprise to some, there are many historical examples of individuals who have suffered personal tragedies and who have risen above their circumstances to become great leaders. 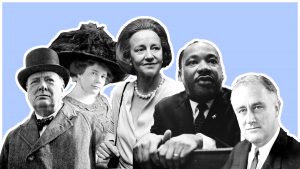