Domestic violence against women is, regrettably, a worldwide phenomenon which has not been abated in recent years . . . despite good faith policy-level attempts to eliminate the problem. Even in post-industrial Western countries like the United States and France, domestic violence continues to be a problem.

In a recent article in the journal Psychoanalytic Psychology titled, “Women Subjected to Domestic Violence: The Impossibility of Separation,” researchers noted that, “In the United States and in France, the figures relating to domestic violence are so alarming that the issue has been the focus of multiple policies related to care and prevention, without seeing any real decline in the phenomenon.”

According to the above-mentioned article, “In the United States, about one in four women will experience domestic violence in their lifetime. “About 1,200 women every year are killed by their intimate partners.” The researchers go on to say: “The figures are worrying: one woman died every 3 days under the blows of her partner in 2014, and 223,000 women are the victims of serious domestic violence each year.”
So, who is at risk to become a victim of domestic violence?

The researchers cite data from the World Health Organization (2016): “Factors associated with increased risk of experiencing intimate partner and sexual violence include low education, exposure to violence between parents, abuse during childhood, attitudes accepting violence and gender inequality.” They go on to say: “Even if, from a legal point of view, gender equality is real in France and in Western countries, past history plays into the persistence of violence toward women.”

In the past year, social movements such as #MeToo have sprung up in the United States and elsewhere that aim to raise awareness of sexual assault in the workplace. And although the #MeToo movement has been successful in bring down serial abusers, the topic of domestic violence still persists.

According to the researchers, although it may be difficult for women to get out of a domestic violence situation, there are steps women can take to begin the process. The note: “The way out of marital violence is found first of all with the help of the police by filing a complaint, and also with the help of the social worker.” In other words, women should reach out to the proper authorities. That said, however, barriers, such as stigma, exist for battered women seeking help. “[A]ttention should be drawn to the difficulty these women have in speaking about what continues to be a matter of shame, especially when the community stigmatizes them,” researchers note.

As October draws to a close, it may be an appropriate time to raise the needed awareness about partner domestic abuse, who is at risk, and what are the solutions needed to combat the problem. If you are someone you know is a victim of domestic abuse, seek out the proper help by contacting law enforcement or mental health professionals who can assist you. 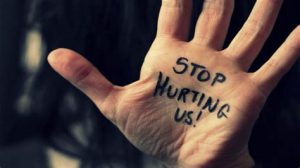