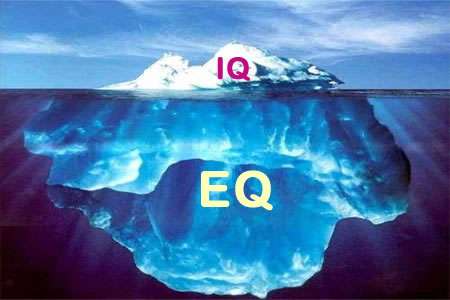 Yet it wasn’t until popularizers such as Daniel Goldman came on the scene when broader conceptions of intelligence hit the mainstream.

In his 1995 book, “Emotional Intelligence: Why it Can Mean More than I.Q.,” Goldman lays out his case for why emotional intelligent individuals tend to perform better in the workplace, school and in social situations. His conclusion: awareness of oneself allows individuals to navigate through the mess of human affairs more successfully by using negotiation skills, long-term goal setting and planning. Having a high intelligence quotient (I.Q.), in other words, doesn’t necessarily mean individuals will be successful . . . but being emotionally intelligent may.

What is Emotional Intelligence?

To understand this seemingly unintuitive paradox, one must first understand what intelligence actually is. When researchers measure I.Q., what is it that they are actually measuring? Problem solving skills? Memory? Creativity? These problems lead Goldman and others such as Howard Gardner to broaden the conception of I.Q. to mean different things. Emotion, Goldman argues, or, more preciously, emotional awareness, has traditionally been left out of the discussion. To illustrate his point, Goldman cites examples of individuals who have scored high on traditional I.Q. tests, but—for one reason or another—have not found successful employment or relationships. He attributes this lack of success to a mismatch between traditional conceptions of intelligence and emotional intelligence.

According to Goldman, the components emotional intelligence include:

Individuals who possess these attributes remain better at mood regulation and impulse control, too.

Generally speaking, though, for the past century, psychology has sat comfortably within the realm of the social and behavioral sciences, and for an idea to be accepted, it needs to be demonstrated experimentally, which echoes the oft-quoted adage from Carl Sagan: “Extraordinary claims require extraordinary evidence.” Claiming there is more to intelligence than what has been standard thinking in psychology for decades is, arguably, an extraordinary claim, and this means designing an objective experiment that can measure the effects of emotional intelligence and reproduce them.

So, where does that leave emotional intelligence? Can it be demonstrated using empirical methods?

As it turns out, it can and it has.

In his book and elsewhere, Goldman has cited a well-known experiment that was conducted at Stanford University with preschoolers, an experiment that has gained popular notoriety in its own right: the marshmallow test.

Since this original test was conducted, the marshmallow experiment has been investigated by neuroscientists, and the area of the brain that regulates impulses has been located. All of this supports the idea that having a high I.Q. or performing well and standard I.Q. tests does not necessarily mean an individual will be successful in their life.

In the years since Goldman published “Emotional Intelligence” he has written about other aspects of human intelligence, namely, social intelligence. Yet no matter if intelligence is emotional or social, the idea that being “smart” means more than scoring high on standard I.Q. test remains a compelling and attractive idea. What’s more, that Goldman’s work has been used by a broad range of educators, psychologists, social workers and clinicians remains compelling.