Did you know that going outside can make you feel better?

And it’s not just folk wisdom.

Science is beginning to catch up to the idea that nature, greenery, and sunshine impact our mental health . . . and it does so in a positive way. And the inverse is true. Being disconnected from nature can actually produce negative mental health effects. This is called “psychoterratica,” and it can be avoided by a simple walk outside.

In Japanese, there is a term, shinrin-yoku, which loosely translates to “forest bathing” in English. According to author Julia Plevin, forest bathing was “. . . coined by Tomohide Akiyama of the Japanese Ministry of Agriculture, Forestry, and Fisheries in 1982.” Although, as the author points out, the idea of being spiritually engulfed in nature goes way, way back in time . . . to at least the 6th Century in Japan.

Put simply, forest bathing “is the practice of intentionally connecting to Nature as a way to heal,” the author writes.

Although the practice of forest bathing may have started in Japan, the idea is just beginning to catch on in the West. Countries like Canada, the United Kingdom, and the United States have all begun to embrace the link between being outside and feeling good.

It’s not exactly a forgone conclusion how the outdoors can make people feel better, but is may have something to do with human evolution. “Humans have evolved in nature,” Plevin writes, “[and] we’ve spent 99.9 percent of our time in the natural world, and our physiological functions are adapted to it.”

Plevin stresses that in order to forest bath, a person does not need to exert an enormous amount of energy. In other words, meditation in the woods, walking, maybe taking photographs . . . these can all be examples of forest bathing. Going on a ten-mile hike may be enjoyable in other ways, but covering such a distance may not be necessary in order to enjoy the healing effects of nature. If you live in a city, for example, going to a nearby park with trees can work. Another example of forest bathing may be to spend time resting near a nearby stream, river, or lake.

To conclude, people can gain positive effects from spending time outside. These effects include reduced stress, a lower heart rate, an improved mood, and decreased inflammation. Finally, as mentioned above, forest bathing can take place almost anywhere outside, as long as it is in nature. Nature can and does heal, and taking advantage of this is free, easy, and is a positive way to align your life with your mind. 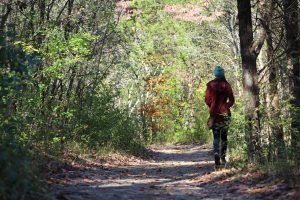