How ‘Situational Awareness’ Can Keep You Safe

Why does having an advantage to begin with seem to breed further advantage?

It is a question that has perplexed humanity since the dawn of civilization. As pointed out by author Daniel Rigney in his 2010 book, The Matthew Effect, the sociologist Robert K. Merton coined the phrase “the Matthew effect,” based on “. . . a verse in the Gospel of Matthew (13:12), which observes that ‘for whosoever hath, to him shall be given, and he shall have more abundance: but whosoever hath not, from him shall be taken away even that he hath.’”

In other words, the rich get richer, and the poor get poorer.

“The existence of Matthew effects in social life may seem obvious,” writes Rigney. “Yet the more closely we examine the phenomenon, the more complex and less obvious it becomes.” The author continues: “Sometimes it happens that the rich and poor both get richer. Sometimes, as in deep economic recessions, the rich and poor both get poorer. And sometimes, though rarely, we find the rich get poorer while the poor grow richer.”

So, like anything dealing with society and economics – and even economic inequality – nothing is really that straightforward. That said, however, as observed in Matthew’s Gospel, the Matthew Effect is something tends to be true. There are many complexities in modern life that account for the Matthew Effect, which remain outside of the scope of this article. But some of the specifics that Rigney points involve economic policies.

This is true with tax cuts in general – that most of the benefits of those cuts benefit the richest pockets of the population. Economic advantages also beget advantages in education, which is one predictor of life-long wealth and career success.

Finally, although a particular individual may not be able to do much about Matthew effects, as they tend to impact societies as a whole, perhaps there are ways that governments and institutions can advocate for a more equitable society. 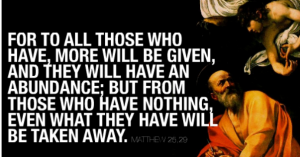