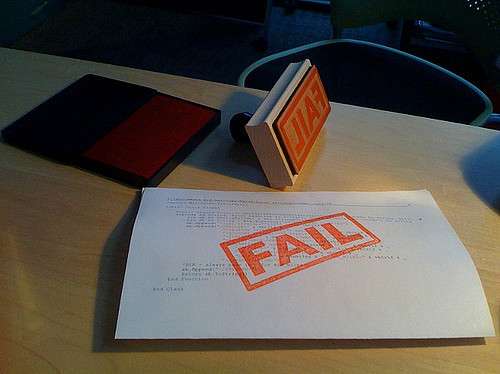 We live in a culture where success is highly prized and failing isn’t. From our childhood years well into adulthood, we are often taught that failing—in the realm of sports, academics, career, family life, and so on—remains something that one ought to avoid. Furthermore, the idea of always winning at any cost is so ingrained both psychologically and culturally in us that it’s almost taboo to talk about failing publically.

Perhaps this is for good reasons: Who wants to be the first person admit loss, defeat—to, in a word, fail? When we win, we are rewarded and reinforced. When we lose, we may be shunned, punished, neglected. That said, however, there can be great value in failing. They key question is:

How does one fail strategically?

Back in the early 90s, an article appeared in the journal of Research in Organizational Behavior titled, “Learning Through Failure: The Strategy of Small Losses.” Its author, Sim B. Sitkin, “argues that failure is an essential prerequisite for effective organizational learning and adaptation.” Sitkin continues, noting that failing can lead to stigma as well as the influence of “failure-avoidance norms”—including risk aversion, the denial of bad news, and retrospective revision of negative history—remain strong psychological mechanisms by which many individuals employ to avoid the realization that he or she may have failed.

With so much emphasis on the benefits of success, Sitkin asks, “What are the drawbacks of success?”—an intriguing question to say the least. The researcher names a few:

According to the author, complacency remains a phenomenon that leads to the “if-it-ain’t-broke-don’t-fix-it” mentality, while “homogeneity” is when an individual or individuals will “. . . tend to stick with their successful ‘formula,’ while maintaining the same operating procedures and the same personnel.” In other words, yes, although success breeds some benefits, if seen from this perspective, it can also breed negative attributes.

To avoid the negative aspects of success, Sitkin proposes what he calls “strategic failure,” or, the idea the a person or organization can fail purposefully. That is, using the “small losses” strategy to reap the benefits that failing can offer. “Because failure stimulates experimentation with new strategies, new methods, and even new personnel, failure can foster additional variety that broader experimentation provides,” Sitkin writes.

Perhaps it’s time to change the conversation and tone about what it means to fail. Sure, as noted at the outset, failing may promote negative feelings and encourage stigmatization of others.

Yet failing can also promote learning and changes in perspective. Failing strategically and purposefully may, in some cases, remain more beneficial than succeeding.