How to Create Good Habits

Conventional wisdom has reinforced the idea that going out in nature is good for you. Feeling down? Talk a hike in the woods. Need an energy boost? Start gardening. And on and on . . .

This type advice has been around for a long time, but it’s only been recently when science and different cultural traditions have seemed to confirm old advice about the positive impact of going outdoors and human mental health.

According to author Julia Plevin, whose book, “Forest Bathing: Finding Clam, Creativity, and Connection in the Natural World,” explores the concept of “forest bathing,” the tradition of going out in nature to, as her subtitle suggests, find calm, creativity, and re-connect with nature is something the Japanese, for example, have been doing for a long time.

“Forest bathing is the practice of intentionally connecting to nature as a way to heal,” Plevin writes. “Part mindfulness, part child’s play, it’s a portal into true understanding of yourself and the world around you. Forest bathing is an embodied love note to Mother Earth and an evidence-based intervention to combat the life-threatening diseases that are associated with modern life.”

The practice of going outside for healing purposes is something that the Japanese have been doing for a long time. There, it’s called shinrin-yoku.

According to Plevin, although the term shinrin-yoku was only just coined in the early 1980s, the practice of forest bathing goes back even further. Some evidence suggests that in Japan different nature traditions have existed for centuries. Japan, in particular, has had a long tradition of honoring nature, and this concept is only just beginning to emerge in the west, as western science has finally begun to investigate how nature influences our moods and emotions.

Put simply, research suggests that being out in nature may lower blood pressure and boost your mood, among other things.
“[T]oday most Americans spend most of their time indoors, including a lot of time in enclosed vehicles,” Plevin writes. “With the constant stresses of modern life, our prefrontal cortexes work on overdrive, which means we rarely ever enter rest-and-digest mode. As a result, we have chronically high levels of cortisol in our bloodstreams and are plagued with high blood pressure and other ailments.”

So, although not a panacea, forest bathing may be a free, easy, and fairly quick way to reduce stress and anxiety (like exercise). As Plevin writes above, most people are indoors for a majority of time, and it may be a good practice to start forest bathing. 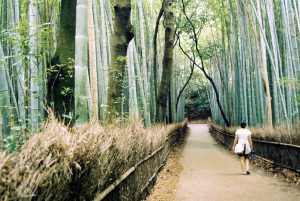