Wintering: How to Retreat when Times Get Tough

In her 2016 book, “Grit: The Power of Passion and Perseverance,” author and researcher Angela Duckworth brought the concept of grit into the mainstream. Before Duckworth’s book, few individuals talked about – or were let alone aware of – the concept of “the power of passion and perseverance.” As a researcher, Duckworth was interested in, what are referred to in the psychological community, “non-cognitive predictors of success.” In other words, it’s like asking: What are traits other than IQ that predict success?

She studied cadets at New York’s West Point Military Academy as well as conducted other empirical research. When looking at a student’s achievement in, say, math, Duckworth noticed: “Apparently, aptitude did not guarantee achievement. Talent for math,” she writes, “was different from excelling in math class.” In other words, Duckworth argues that placing too much emphasis on natural talent in any area, as if natural talent is some kind of superpower, may lead to complacency.

Duckworth’s ideas are inspiring. For one, rather than focusing on a deterministic attitude of “You either have it or you don’t,” grit places more responsibility and power in the hands of the individual. Moreover, knowing “how to fail” is an important aspect of grit.

“The scientific research is very clear that experiencing trauma without control can be debilitating,” Duckworth writes. “But I also worry about people who cruise through life, friction-free, for a long, long time before encountering their first real failure. They have so little practice falling and getting back up again. They have so many reasons to stick with a fixed mindset.”

In other words, a person’s ability to persist through failure is an important concept within the grit framework.

“I see a lot of invisibly venerable high-achievers tumble in young adulthood and struggle to get up again,” she writes. “I call them ‘fragile perfects.’ Sometimes I meet fragile perfects in my office after a midterm or a final. Very quickly, it becomes clear that these bright and wonderful people know how to succeed but not how to fail.”

One of the main takeaways from grit is this: Having talent is important but limited. Having intelligence is important but limited. But what can really help a person succeed is having grit, having the power of passion and perseverance. Finally, gritty individuals are driven and conscientious. These are the traits that can help a person succeed in many areas of their lives. 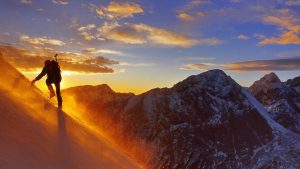 Duckworth, A. (2016). Grit: The power of passion and perseverance. Scribner. New York, NY.