Although more than 100 years of industrialization may seem like a long time, it’s a mere drop in the bucket compared to the amount of time humans have been roaming the planet. “[Humans] as a species has spent 99.5% of [their] evolutionary time in completely natural environments,” writes author Marco Mencagli.

That said, psychologists, researchers, and other mental health professionals have only just begun to investigate how built environments – like cities – impact a person’s mental health.

Studies, articles, and books have been emerging in recent years, touting the mental health benefits of being outside. People who specifically spend time in parks, forests, or among the trees are said to have a greater sense of calm, lower blood pressure, stronger immune systems and other benefits. In other words, spending time in nature has “therapeutic and regenerative potential.”

The one of many reasons for this, for example, is noise pollution. Cities and urban environments tend to be very loud, and, over time, noise pollution can have negative outcomes for some people.

“Sound pollution,” Mencagli writes, “is often at the root of failure to enjoy a natural space. Now matter how aesthetically pleasing, a park afflicted with extraneous noise (traffic, construction, sirens, loud voices, shouting, and so on) inevitably loses much of its appeal.”

But the concept of spending time in nature to improve one’s mental health isn’t new, and it isn’t limited to the Untied States.

“In 1982, the Japanese forest service inaugurated shinrin-yoku, which is a full-immersion journey into the forest atmosphere,” the author writes. “In English, this term was translated as “forest bathing trip,” or simply “forest bathing,” which we can define as entering and “soaking up” a forest environment.”

So, how much time is enough to feel the positive mental effects from spending time in nature?

“Regarding exposure time, we have fairly precise information,” Mencagli writes. “Japanese protocols indicate that about ten hours over three days is sufficient, with visits in the forest of at least two hours for each visit, taking into account the possible variability in individual responses to these kinds of biochemical stimuli.”

Finally, taking some time to get outdoors isn’t just a fun activity to do, but it is also something you can do to improve your mental health. 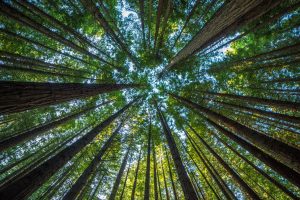