Last year, author John Kaag published, “Sick Souls, Healthy Minds: How William James Can Save Your Life.” The title alone intrigued me, and I bought the book. William James, if you don’t know, is considered by most to be America’s first psychologist. In the late 19th and early 20th century, William James published many works that explore psychology, philosophy, and religion.

I’ve noticed that over the past few years, generally speaking, that there have been a number of philosophy books geared and marketed for a general readership. In contrast to academic philosophy, which is primarily relegated to the classrooms of colleges and universities, and whose authors mostly write for each other in a pompous, unreadable prose, and that almost no one reads except for other academics.

I applaud these types of books geared toward a popular audience, and Kaag’s book is no exception. He, like many other of these authors, have Ph.D.’s or other academic credentials, yet these authors don’t hesitate to introduce heavy topics to the general reader. Put simply, philosophy ought to be something more accessible to more people, again – unlike academic philosophy that never tends to never leave the ivy tower.

Which brings us back to William James . . .

Kaag’s book focuses on James’ struggle with depression. By most accounts and according to Kaag, James struggled with depression for much of his adult life. It’s a fact also pointed out by author Kay Readfield Jamison in her book, “Touched with Fire.”

“Rumors have swirled for more than a century that James had his own stint at the hospital, but they have faded in the hundred years after his death,” Kaag writes. “Today, James is usually described as a man who faced mental illness without the help of doctors.”

James, like many people, really struggled with the existential-ish questions, “Is life worth living?” He considered suicide throughout his life, a sign of his depression. Ultimately, though, according to Kaag, James ultimately came to realize (mostly though writing, research, and philosophizing) that life is worth living, even though there isn’t a clear empirical reason for consciousness to begin with. (It’s worth noting that, however, some religious folks may take objection to the above statement. So, too, some atheists would argue that, even though we don’t yet understand the relationship between consciousness and matter, consciousness is an emergent property of a complex adaptive system, i.e., the brain’s hardware, if you will.)

The esoteric questions may not even seem relevant to many of us who are too distracted by our smart phones, social media, and by making a living. But they are preciously the types of questions James loved to ponder throughout his life.

To conclude, Kaag’s book is really worth the read if these sorts of topics are of interest to you. The book further explores James’ struggle with depression, and how philosophy saved his life. 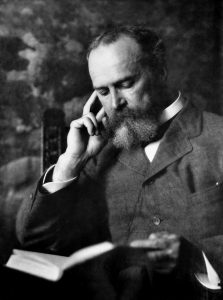