The Benefits of Meditation

More than 2,000 years ago, the Greek philosopher Aristotle laid down the basic framework for virtually every story told. That framework is basic, recognizable, and enduring: beginning, middle, and end.

Sure, some stories have more than one plotline. Some stories, in fact, may also have ambiguous endings, complex characters, and exotic locations. But Aristotle’s beginning-middle-end framework continues to survive to this day.

Anthropologists who have studied the subject think that telling stories is older than (way older than) even Aristotle’s framework. Some anthropologists think that storytelling is as old as the discovery of controlled fire – and human society, which dates back to more than one million years ago on the African savannah.

One question that begs for an answer is why? Why does the beginning-middle-end framework seem so natural? Is it because we’ve seen and heard it so much that it feels like it’s been known forever, or is it because there really seems to be something innate about it in humans?

In 2014, Anthropologist Polly Wiessner published research “that showed a dramatic difference between daytime and nighttime gatherings,” and what we talk about during those times. “Daytime talk, even when large groups were involved, centered on economic discussions and social gossip. At night, the mood mellowed. There might be singing, dancing, and rituals. But the most time was spent on storytelling.”

In other words, the time of day apparently influences the content of human conversations.

According to TED founder Chris Anderson, when speakers tell stories, they usually contain 5 key elements. They are:

These five elements, Anderson says in his book, “TED Talks,” published in 2017, can be mixed and matched, but most successful TED speakers employ them in one way or another. And although Aristotle’s beginning-middle-end framework endures, it acts like a simple formula where and story content can be pulled it, and – chances are – a decent story will emerge.

Storytelling can also be a chance to present new information in a new way. As it turns out, the human brain loves novelty. The neurotransmitter dopamine is released when people learn something new, and stories are one way to deliver novelty. Because of its structure, the human brain generally likes to conserve energy, as neuroscientist Gregory Burns has called the brain “a lazy piece of meat.” And what’s one way to kick the brain out of this energy-conserving state?

Learning something new, or novelty.

Finally, one reason that humans are natural storytellers is because it seems to be a big part of our history as a species – as well as our nature. The 3-part story structure above says to say something about the human brain, how we think, and how we like to hear our stories. 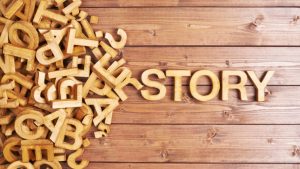