For a long time, I didn’t think that thoughts had any real significance.

“Thoughts don’t affect the real world,” I used to think. But, boy, was I wrong.

As it turns out, there is an exhaustive psychological literature – focused around Cognitive Behavioral Therapy (CBT)– which highlights exactly how, and which thoughts, can be detrimental toward our wellbeing.

One prime example of this comes from Albert Ellis, Ph.D., in his seminal book, “A Guide to Rational Living.” Originally published in the early 1960s, Ellis identifies specific thoughts – chapter by chapter – that could undermine our mental health. Below are just a few thoughts that, according to CBT, could turn our thoughts against use.

• Having a Dire Need for Approval
Ellis calls this “Irrational Thought No. 1” – “the idea that you must – yes, must – have love or approval from all the significant people in your life.” Wanting love or approval appears to be a human universal; however, this type of thinking turns against us when it undermines our wellbeing.

• Stop Blaming and Start Living
Ellis sums this up by nothing that this is “[t]he idea that people absolutely must not act obnoxiously and unfairly, and that when they do, you should blame and damn them, and see them as bad, wicked, or rotten individuals.”

• How to Feel Frustrated but Not Depressed or Enraged
This concept is summed up by “[t]he idea that you have to see things as being awful, terrible, horrible, and catastrophic when you are seriously frustrated or treated unfairly.” Admittedly, I’m guilty of doing this, but recognizing it is the first step to correcting it. In short, this is also known as “catastrophic thinking.” Put another way, this type of thinking leads to panic and anxiety, when, in most cases, it isn’t warranted.

• Acquiring Self-discipline
“The idea that you can easily avoid facing many difficulties and self-responsibilities and still lead a highly fulfilling existence. . .” is an idea that remains highly prevalent with many people who want some type of career or professional success, but who are unwilling to put in the hard work that is required.

• Rewriting Your Personal History
Ellis calls this “[t]he idea that your past remains all-important and that because something once strongly influenced your life, it has to keep determining your feelings and behavior today.” Again, I have been guilty of doing this, too. Our past personal history can be extremely powerful, but realizing that it not need to control your future remains even more powerful.

Although the above list is not exhaustive of all of the aspects of CBT, it is, however, a snapshot of some of the types of thoughts that can undermine out mental health. The first step to a happier life is to first identify the thoughts that remain unhelpful and then moving on to more productive ones. 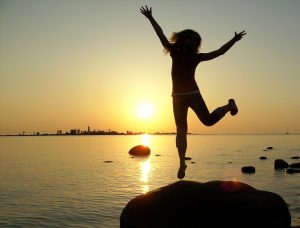