Exercising During a Pandemic

Violence in our culture tends to be looked at through two lenses.

In the first way, violence is glorified by popular culture. It should come as no surprise that parents and politicians have been complaining for decades about the nature of violent video games, television shows, movies, and so on. Violence, in these situations, is often portrayed as something a hero or heroine does.

On the other hand, in a sort of personal psychological way, violence is thought of as “something that will never happen to me.” In this way, violence will occasionally pop up in the form of a mass shooting or terrorist attack, but most people tend to think of violence in a “see no evil” way.

However, both of these viewpoints are essentially wrong, according to author Tim Larkin. In his book, “When Violence is the Answer,” the security expert and former Navy Seal trainee demystifies violence, and urges the reader to think about it more as a tool rather than as a moral issue.

“Violence is rarely the answer,” Larkin writes, “but when it is, it is the only answer.”

This statement may be controversial, but Larkin argues that 99% of the time, avoidance or de-escalation will get the job done. But what should a person do when they come up against someone who is hell bent on physically hurting them? It is an uncomfortable truth, Larkin argues, that violence may sometimes be necessary to avoid injury or death.

“That is what you need to understand when your life is at stake, and it starts with the sober recognition that violence is not an ideal, or a way of life, or a value – it’s a tool, plain and simple,” Larkin writes.

Moreover, Larkin distinguishes between “social aggression” and “asocial violence.” The distinction, according to the author, involves communication. The former always involves message sending. It may be manifested through the schoolyard fight, where one teenager takes on the bully to send a message, “I won’t be picked on anymore.” The latter type of violence, however, is much more insidious. Asocial violence doesn’t communicate anything, according to Larkin. It is the violence used by killers who do not hesitate for a moment to harm.

Larkin’s book – it is worth nothing – only deals with the few moments or seconds of a violent act. Even in clear-cut cases of self-defense, prior to any violent incident, the justice system takes over.

Larkin also discusses “the force continuum.” This is a concept taught to police officers and ranges from verbal commands to full-blown deadly force, such as using a firearm.

Finally, the key takeaway from Larkin’s book is that although most of use avoid violence, which is mostly a good thing, we need to be ready mentally for that 1% chance when our lives may be at risk and there is no other alternative. As the author says, it’s about “knowledge, preparedness, and confidence.” 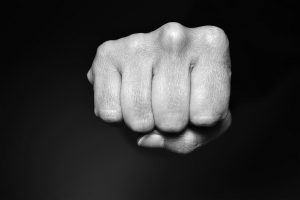