Does Marriage Counseling Work? What to Expect.

Post-Traumatic Stress Disorder (PTSD) is a mental disorder that impacts millions of Americans each year. Often, PTSD is associated with military veterans, which do, in fact, suffer from high rates of PTSD; however, PTSD can and does impact millions of other individuals.

According to the National Institutes of Health (NIH):

It is natural to feel afraid during and after a traumatic situation. Fear triggers many split-second changes in the body to help defend against danger or to avoid it. This “fight-or-flight” response is a typical reaction meant to protect a person from harm. Nearly everyone will experience a range of reactions after trauma, yet most people recover from initial symptoms naturally. Those who continue to experience problems may be diagnosed with PTSD.

In other words, PTSD is a condition where a person’s flight or fight response, put simply, is not functioning properly. Again, the NIH describes the following about PTSD:

While most but not all traumatized people experience short term symptoms, the majority do not develop ongoing (chronic) PTSD. Not everyone with PTSD has been through a dangerous event. Some experiences, like the sudden, unexpected death of a loved one, can also cause PTSD. Symptoms usually begin early, within 3 months of the traumatic incident, but sometimes they begin years afterward. Symptoms must last more than a month and be severe enough to interfere with relationships or work to be considered PTSD. The course of the illness varies. Some people recover within 6 months, while others have symptoms that last much longer. In some people, the condition becomes chronic.

Whereas, on the other hand, Avoidance symptoms include: “Things that remind a person of the traumatic event can trigger avoidance symptoms. These symptoms may cause a person to change his or her personal routine. For example, after a bad car accident, a person who usually drives may avoid driving or riding in a car.”

If you or a loved one are experiencing symptoms of PTSD, please reach out to a certified mental health professional. 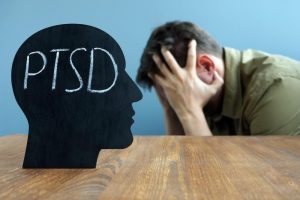