According to author Erin Niimi Longhurst, “Kintsugi is the art of repairing broken pottery with golden lacquer.” The concept is Japanese, and its part of a larger set of concepts that Longhurst refers to as the “Japanese Contentments.”

“Shattered pieces are put back together and become even more beautiful laced with gold than they were originally,” the author writes. “Rather than being discarded or laminated for its flaws, an object becomes more treasured than ever, as its disfigurement or defect becomes its strength though the art of kintsugi, adding to its beauty” (emphasis mine).

Often times, many individuals may feel broken after facing adversity. Kintsugi may teach us how to put ourselves back together. Additionally, when we are put back together, we can realize that we were better than we were previously.

The Japanese concept of Kintsugi has been around for centuries.

“According to legend,” writes Longhurst, “the art of kintsugi, meaning ‘connecting with gold,’ can be attributed to the fourteenth-century shogun Ashikaga Yoshimasa, who was so dismayed at a botched repair job to one of his prized ceramic pieces that he implored some Japanese craftsmen to come up with another, more aesthetically pleasing, solution.” Finally, she adds: “The art of kintsugi was developed as a response to this.”

“I love the philosophy behind kintsugi because the hardships we face really do shape who we are as people,” she writes. “In the same way that you need the bitter in order to taste the sweet, the struggles we all face – loss, betrayal, heartbreak, disappointment – are a part of our histories, our identities, and our stories. And rather than hiding the scars that they leave,” she continues, “kintsugi encourages us to celebrate them, and the ways in which they serve to define us. Nothing is ever truly broken, no matter how painful it might seem at the time.”

Ultimately, kintsugi is a metaphor that we can apply to our own lives. At one time or another we will all face hardships and adversity. I would like to suggest that kintsugi is really another form of psychological resilience. But it differs in that it takes a backward-looking view; that is, kintsugi asks us to pick up the pieces after a hardship, which is – in a way – resilience. Finally, we can us the concept of kintsugi and apply it to our own lives. 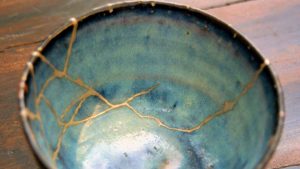