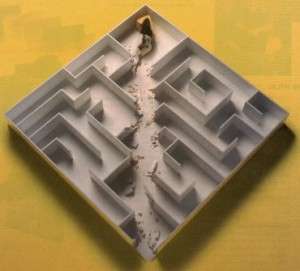 When a person thinks of “lateral thinking,” one name may come to mind: Edward de Bono.

In the 1960s, in the era before books of popular psychology began to dominate, De Bono remained one of the first psychologists to have his ideas reach a mainstream audience. In his books such as “The Use of Lateral Thinking” and the simply titled “Lateral Thinking,” De Bono introduced to the public a new way of thinking about problems and dilemmas.

His approach to creativity and problem solving remains influential to this day.

Albert Einstein was arguably a lateral thinker. In his early 20s, he worked as a patent clerk in Switzerland. Between filing patents, Einstein, a notorious daydreamer, would often think about things like how gravity works and atoms. Centuries before, Isaac Newton has published his equations for gravity, describing it as an attractive force. Although Newton’s work was a huge leap forward, it was not complete. It wasn’t until Einstein that we achieved a fuller understanding of the nature of gravity.

How did Einstein, an unknown, young patent clerk, revolutionize our understanding of the force of gravity?

He did it by “thinking outside of the box,” which is a simple, yet workable definition for lateral thinking. Many physicists simply took Newton’s description of gravity for granted, and scientists felt the issue had more or less been solved . . . until Einstein.

More specifically, however, lateral thinking can be described as “. . . a process that enables us to restructure our patterns, to open up our mind and avoid thinking in clichéd, set ways.” In other words, our minds are constantly looking for patterns. And although these patterns remain helpful, they may not always lead to new insights, or so De Bono argues.

Our culture in general, but in particular our education system, emphasizes the use of logic by which one correct statement proceeds to the next one, and finally to the “right” solution. This type of vertical thinking is good most of the time, but when we have a particularly difficult situation it may not give us the leap forward we need.

De Bono did not simply talk abstractly about different ways of thinking . . . he actually laid a foundation down as to how to do it—a series of practical steps, if you will. As summarized by Bowdon, below are a few “techniques of creative thinkers.”

• Brainstorming. A lot has been written about how to brainstorm effectively. Whether you write your ideas down, make a list, draw pictures or flowcharts, brainstorming remains an effective tool.

• Quotas. Set a specific number of new ideas you would like to generate. This forces you to think laterally.

• Challenging assumptions. This remains a good exercise in seeing a problem in a new way.