Yoga: The Rewards and Benefits

In the northeast part of the United States, Spring, which officially began on Thurs., March 19, 2020, has felt a little muted. First, most Americans have been given shelter-in-place orders by their respective states – limiting mobility and the freedom to move around outside – and, second, the weather up until now has been overcast and cold. And although Summer does not officially begin until late June, this week marked an important turning point.

Although it’s not heavily celebrated in the United States, May 1 is an important date in certain countries, and it has a long history, as we will see.

Known as “Beltane,” May 1 “is [a] cross-quarter day falling roughly halfway between the Spring Equinox (March 19) and the Summer Solstice (June 20),” writes the authors of the book, “Beltane.” This is “. . . a time when the days are growing longer and the sun’s strength is waxing.”

So, in short, May 1, or “Beltane,” marks an important date on the calendar as it moves ever closer to warmer days, more light, and summer (in the Northern Hemisphere). As it turns out, although May 1 is not a particularly important day in the United States, Beltane has a long history.

Ancients peoples such as the Celts celebrated and marked particular dates on the calendar that most of our modern holidays are based on. For example, Christmas is celebrated near the Winter Solstice, Halloween rests on “Samhain,” and Easter rests near the Spring Equinox and a time of renewal called “Ostara.” Almost all of these holidays have pre-Christian, ancient roots.

“As a pastoral people, the early Celts understood the year as twofold,” writes the authors of the book, “Beltane.” “[T]here was a darker, colder half of the year beginning at Samhain that coincided with the time when cattle were slaughtered, and there was a lighter, warmer half of the year beginning at Beltane that marked the time when cattle were led out to open summer pastors to gaze.” Finally, the authors write: “While Samhain was a time to connect with darker energies, Beltane was a time to tune in to the current of life, renewal, and optimism.”

Beltane is a date that has traditionally been imbued with sexuality, growth, and renewal. Maypoles, for example, according to author Judy Ann Nock, are an overtly phallic symbol. “The blatant sexual suggestiveness of this custom [the Maypole] was not lost on the early Puritans, who outlawed the maypole in 1644,” Ann Nock writes. Also, “The Green Man” is a symbol of Beltane – if you haven’t seen it, it’s a face that appears in woodlands and trees that resembles an elder man with a beard.

Finally, May 1, although not a date that marks particular celebration in the United States, is a date that really marks the prime of spring and make people remember that may more warm and bright days lie ahead. 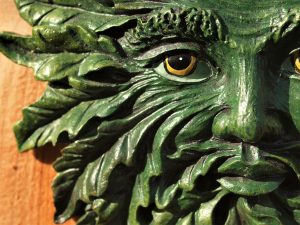