I recently finished reading “The Black Arts,” a book originally published in 1967 by author Richard Cavendish. Not too long ago the book saw its 50th Anniversary re-printing, and although things like demonology, witchcraft, numerology, and astrology have fallen victim to the realm of superstition, slain by the progress of scientific thinking, there still remains interest in this – and similar – subjects.

In the book’s introduction, writer Mitch Horowitz sets the context of when the book was first published. Along with many other social and cultural changes occurring in the mid to late 1960s, a resurgence in the interest in “black magic” took place in the United States. Horowitz mentions how in the same year that Cavendish published “The Black Arts,” the toy company Parker Brothers relaunched the Ouija board.

Many of the beliefs surrounding the Occult go back thousands of years. And although revisiting its storied history remains outside the scope of this article, knowledge about Occult practices continue to lie outside the mainstream with one – perhaps two – exceptions: astrology and tarot cards.

Astrology, which has gone mainstream in the United States, attempts to make predictions about an individual based on the alignment of stars and planets. One of the serious flaws with astrology, however, is that science has basically debunked it, the Earth is not at the center of the known universe, and there are only roughly 2,000 or so stars that can be seen with the human eye. Many more stars are visible with telescopes – optical and otherwise – and the first useful telescopes were not invented until roughly 400 years ago. Astrologers do not take this into account. The majority of people read horoscopes for fun or pleasure, though, but it’s amusing to think that astrology has roots as an occult practice that was at one time considered dangerous by church authorities.

Tarot readings, like astrology, has its roots in the Occult too. The practice of tarot readings is, again, very old, and is a type of fortune telling. As Cavendish wrote in 1967, “There are almost as many interpretations of the Tarot – occult, Christian, gipsy, psychology – as there are interpreters.” The author goes on the write: “The cards contain such a richness of symbolism and suggestion that no two people are likely to react to them in quite the same way.”

In other words, anything can mean anything to anyone at any time.

Again, many people may do a tarot reading for fun or amusement, but only a small minority of the population elevate tarot to the level that it once had.

Although there are many more aspects of Occult – such as witchcraft and demonology – much like astrology and tarot, these subjects have been slain by science, and only a few true believers entertain the idea that they are to be taken seriously – thankfully. On the other hand, however, certain Occult practices like astrology are fun to entertain from time to time. 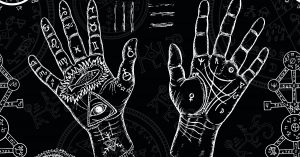