Those who suffer from attention deficit/hyperactivity disorder (ADHD) may find it hard to sit still, concentrate, or follow through on finishing a task. In the 1980s and 1990s, researchers and clinicians were just beginning to understand the disorder, and, since then, there has been a flood of new information about ADHD, and now it remains fairly easy for individuals to seek treatments.
Also, in the past few decades, the general public, too, has become more aware of ADHD, and October has been designated as National ADHD Awareness Month.

In this case, ADHD tends to impact children who are in school, and having the disorder may have a negative impact on school students. As a casual glance at the medical literature suggests, students who have ADHD may have a difficult time completing tasks in school, or they may find it hard to concentrate. For individuals on the more “hyperactive” end of the ADHD spectrum, sitting still may be a nearly impossible task.

ADHD may also affect adults, too.

Much like their affected young counterparts, adults with an ADHD diagnoses may find it difficult to concentrate on tasks for an extended period of time. Having ADHD may also negatively impact an individual’s work, too.

One misconception about ADHD, however: ADHD is a mental health disorder that is diagnosable by a certified professional. Having ADHD means the disorder is rooted in the brain. For a long time, mental health professionals had a murky understanding of what causes ADHD. It is now understood that ADHD has its roots in the brain and possibility even in brain development, and having a diagnosis of ADHD is more complicated than not being able to just concentrate.

If you believe that you or someone you know is exhibiting the signs of ADHD, please seek the advice of a certified professional.

Finally, because October is National ADHD Awareness Month, it may be a good time to stop, think, and reflect upon this disorder. Arguably, others benefit when more and more individuals become educated on a mental health disorder that continues to impact many individuals. 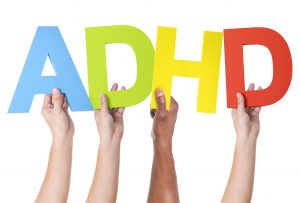