These individuals, according to Navarro, live by the mantra, “Trust no one and you’ll never get hurt.” “Paranoid personalities are consumed by irrational mistrust and fear,” Navarro writes.

Individuals with a paranoid personality can cause damage in other people’s lives, whether at work or within a family, friendships, or in romantic relationships. As Navarro writes: “They’re thin-skinned and hyperreactive,” he says. “And when crossed, rejected, or embarrassed, they may lash out and can be extremely dangerous.” The author goes on to write: “When coupled with narcissism, the paranoid personality drives violence on ever level: from criminals to cult leaders to dictators who live by their own rules, vilify others, and annihilate anything that gets in their way.”

Some very famous examples of individuals who were known for their paranoid personality are Joseph Stalin, the Unabomber Ted Kaczynski, and even Howard Hughes. Hughes, although not a criminal, “was smart by very paranoid,” Navarro writes. “So much so that he cocooned himself in hotel rooms during the last ten years of his life, allowing no outsiders to see him.”

More commonly, the paranoid personality may be an ex-boy friend or girlfriend, ex-spouse, or neighbor. These paranoid individuals may be extremely jealous. It may be “the driver who thinks that you cut him off intentionally, so he tailgates you with the horn honking, headlights flashing, rude gestures, and cursing,” Navarro writes. Or, it could also be “the man who thinks everyone’s hitting on his wife or girlfriend, so at parties he sticks his nose into every conversation she has, especially with [other] men.”

Some, but certainly not all, of the tell-tail signs of an individual who may be paranoid are, according to the author:

Finally, an individual with a paranoid personality may be a “grudge holder” or collector of perceived wrongs. As Navarro concludes, if possible, it may be a good idea to avoid these types of individuals. They may not always have your best interest in mind. 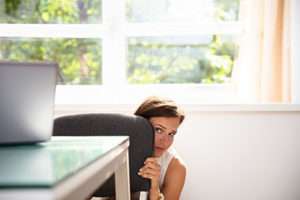