How much control do you think that you have?

In current culture, the phrases “willpower” and “effort” sound a little old fashion, if not faux pas all together. But this idea – the idea of having control of yourself, your thoughts, and your actions – are as old as Western Civilization. The stoic philosophers, which date back to the time of ancient Greece, thought of events as two kinds: things that are within your control and things that are not in your control.
More than two thousand years later, modern psychology identified an individual’s “locus of control.” According to this way of thinking, individuals either have an internal locus of control or an external locus of control. With an internal locus of control, people tend to think of events as within their sphere of influence. Generally, this isn’t good or bad, but if taken to the extreme, however, individuals can end up blaming themselves for everything that occurs . . . generally not a healthy way to live.

The key to being happy, as the stoic philosophers argued, is knowing the difference between what is within your sphere of influence and what is not. Having more of an internal locus of control, for example, may be good for things like staying on top of a healthy lifestyle, getting into a workout routine, or similar lifestyle individual decisions. On the other hand, having an external locus of control may be useful when identifying situations that are truly out of our control. Blaming others, including ourselves, for things that are not anyone’s fault (sometimes referred to as the “fundamental attribution error” in psychology) is also not useful nor does it help promote a positive attitude within ourselves or within others.

Putting in the effort and having the right attitude are things that we can control, and, therefore, within our sphere of influence. We can not control how others, however, will perceive us, what they will say, and – worst of all – what they will think about us . . . but as the ancient Greek philosophers have stressed, being happy is about knowing the different between what we can control and what we can not control.

Finally, when it comes to what other people say or do to us, we truly have no control over that. All we can do, as is often repeated, is control how we choose to respond – or if we choose not respond at all. The focus is putting in the right effort and having the right attitude.
This may go a long way down the road to personal happiness . . . and personal freedom. 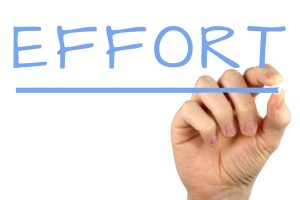