Those who suffer from depressive episodes may understand how debilitating it can be. According to the authors of a recent study, about half of the people who suffer from a Major Depressive Episode (MDE) for the first time will also experience reoccurrences. This means that the likelihood of experiencing more than one MDE is about 50 percent after experiencing the first MDE.

“It is well documented,” as the author’s write, “that highly stressful life events commonly precede first episodes of major depression, and that these experiences become progressively less common prior to recurrences.”

Many people who report or who are diagnosed with having a major depressive episode also report having reoccurring instances of them. In other words, according to research, once an individual has at least one MDE, having a second one becomes more likely. Additionally, depression, generally speaking, is one of the leading causes of disability worldwide, according to the World Health Organization.

“Approximately 40 to 50 percent of people who become clinically depressed for the first time will have at least one recurrence over their lifetime,” the authors of the above study write. “With each recurrence, the risk rises more for another. Consequently, some people will go on to experience many, many depressive episodes over the life course. These highly recurrent conditions are an immediate priority for research and prevention.”

This, in part, helps explain why individuals with depression can not “just snap out of it.” Depression, unlike other types of illness, tends to linger around, and it may take persistent and long-term interventions to treat it.

So, how can researchers and psychologists predict who will have reoccurrences of depression and who will not?

Answer: Reoccurrences of depression are hard to predict.

“A significant obstacle to progress, and ultimately for preventing lifetimes riven by recurrences, is our current inability to predict who among the initially depressed will become recurrent,” researchers write. “Prospective studies could assess first onset cases on a range of risk indicators (e.g., genetic, biological, psychosocial), follow them over time, and eventually “look back” to determine which factors forecasted a virulent lifetime course.”

Although it may be difficult to predict who will have occurrences of depression, one element that does appear to help aggravate depression are life stressors.

“Life stress and its relation to major depression may harbor important clues for discovering who among the initially depressed will become recurrent,” researchers write. “Severely stressful life events are potent precipitants of major depression, yet these types of experiences become increasingly less common prior to recurrences.” 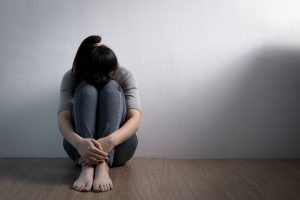