Harmony, change, and balance – these are but some of the words that may come to mind

when you think of September.

September is the time of summer’s end, the Harvest Moon, and the Autumnal Equinox. The

equinox is that special day when daylight and darkness are in balance, albeit for a brief

moment, which occurs only twice a year. From there, in the Northern latitudes at least, we

will experience a retreat of daylight until darkness reaches its zenith at the Winter Solstice,

December 21, or, “the year’s midnight,” as the 16th-century poet John Donne called it, before

sunlight gradually and eventually creeps back into our lives and into the calendar.

That makes this year’s Autumnal Equinox, with its theme of balance and transition, seem a

Historically, of course, when humans were more tied to the land, when societies and

economies where agrarian based, the seasons remained paramount. Folklore and myths

emerged from the year’s seasons and cycles dating back to the mists of pre-history. The

Autumnal Equinox is a time to take stock; it is the time of the harvest. And although, nestled

in our post-industrial comfort, Americans no longer look to the land as we once did to mark

time, maybe we can still learn the lessons that September still has to teach us. The equinox

is, after all, one of the oldest harvest celebration sin Europe.

Hal Borland, a 20th Century naturalist and essayist and a personal favorite, had this to

say: “September is more than a month, really; it is a season, an achievement in itself,”

he writes. “It begins with August’s leftovers and it ends with October’s preparations,

but along the way it achieves special certainties and satisfactions.”

Elsewhere, we can look to present-day Earth-based spirituality, such as in Wicca and

Neo-Paganism, to shed light on the meaning of the equinox. There, practitioners

god, apparently revered by both the Romans and the Celts. (In ancient Rome, the

Autumnal Equinox “marked the infamous Festival of Dionysus, the God of Wine,

whose party lasted for as many days as the revelers could remain upright.”) So, if the

by author Ann-Marie Gallagher. And sunsets have a duel meaning; they are at once

beautiful and sad. Beautiful because the sun’s light transforms the sky on certain days

with a color palate of pink and lavender, scarlet and golden hues as it descends – and

sad because, well, it cues darkness to take centerstage, which can feel like a void.

Of course, nothing will ever convince the summer fundamentalist, who believes that

Summer is the only time of year worth celebrating, to appreciate and enjoy September.

In fact, for them, September is really a time to mourn summer’s end. But for those of us

remaining, the Autumnal Equinox may be an opportunity for soul searching and to

practice balance and change in our lives.

So, celebrate this September as its own season. 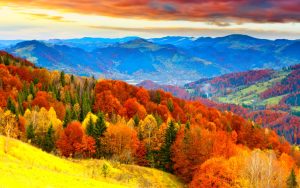