Practice the Art and Healing of “Forest Bathing”

The concept of “resilience” has gained a lot of momentum in popular psychology over the last few years. The psychology literature is littered with research about the benefits of building up a resilient attitude in the face of challenges.

And although resilience has found a home in mainstream psychology, the idea isn’t new. In fact, the contemporary idea of psychological resilience isn’t limited to the United States. According to author Justyn Barnes, the Finnish art of “Sisu” (pronounced “SEE-soo”) is defined as “problems are confronted courageously, challenges are re-framed as opportunities for growth, setbacks are perceived as blips, and solutions are pursued with tenacity and creativity.”

According to the author, “Sisu has been a cornerstone of Finnish culture for more than 500 years.” Part of the reason for this is because living in the far north can be difficult, and the Finnish people have had to develop a tough mindset in order to endure for centuries. Moreover, the Finnish have dealt with wars and other society-wide problems.

As noted by the author, “The 1939 – 1940 Winter War that followed the Soviet Union’s invasion of Finland drew international attention to the strength of Finnish sisu.” Amazingly, the Finns were able to push back their Soviet invaders even though there were outnumbered. “This unlikely success was underpinned by the Finns’ indomitable spirit.”

Interestingly, like many of its neighbors, Finland is often ranked as one of the happiest countries in the world. “The 2019 United Nations World Happiness Report ranked Finland at number one for the second year running,” writes Barnes. “What is the country’s secret?” The author continues: “Each year, eight long months of winter entomb the landscape in frost, and nothing grows. But over the centuries, Finns who work the land have found ways to be resourceful and resilient, developing methods to survive through these dark, barren days.”

So, how does sisu work?

One aspect is attitude. “While sisu is grounded in a realistic attitude, it also requires a streak of optimism,” Barnes writes. “Not the kind of blind optimism that has no basis in fact, but a deep-seated belief based on real-world experience that things can get better no matter how bleak the current situation.”

To put it bluntly, some oft-used phrases about sisu include “never surrendering,” “persevering no matter how many times life knocks you down,” “having the guts. . . to get through the most difficult times and still survive.”

Finally, sisu is a Finnish idea that can be very useful for Americans to adopt. 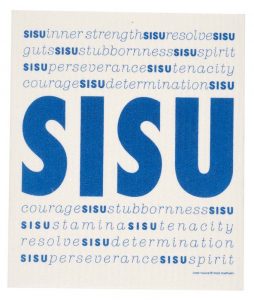