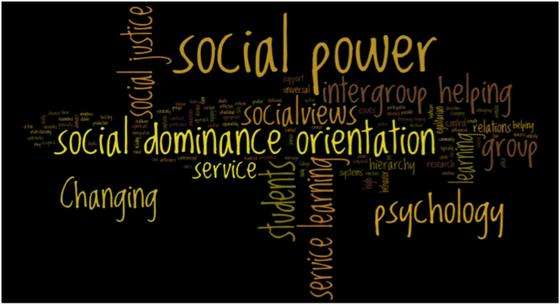 Prejudice and discrimination are hot topics in social psychology, the branch of psychology that explores how factors in our social environment impact the way we think and act, but they are extraordinarily complex ones. Like many topics in psychology, researchers work to understand them by exploring in them in a variety of different ways. Some researchers run studies to see how prejudice and discrimination influence behavior – for example, a recently published study found that faculty members in colleges and universities were more likely to respond to emails from students seeking mentorship who had names associated with white men (e.g. “Brad Anderson,”) than names associated with white women (e.g. “Claire Smith”), or names associated with people from other racial and ethnic groups (e.g. “Lamar Washington,” “Gabriella Rodriguez”) (Milkman, Akinola, & Chugh, 2014). Other researchers look at what are often referred to as “personality traits” in common vernacular, or “individual differences” or “attitudinal dimensions” in the field of psychology, and try to the identify traits or personal characteristics that are related to being prejudiced. One of the most well-researched attitudinal dimensions in social psychology is social dominance orientation.

Sidanius, Stallworth, and Malle (1994) define social dominance orientation (SDO) as “. . . the extent to which one desires that one’s in-group dominate and be superior to out-groups.” The authors identify SDO as a central individual difference variable that influences other dimensions of personality and other attitudes that people hold. We call variables like this “attitudinal dimensions,” because they are treated as continuums – meaning that from a theoretical standpoint, everybody is somewhere on the “social dominance orientation” spectrum, even if that is at the very low or high end.

Personality variables that relate to prejudice are important because prejudice and discrimination are normalized through ideologies that legitimize or justify them – and believing that group inequality is acceptable is one ideology that would theoretically support (and has been empirically shown) to promote prejudicial thoughts and discriminatory actions (Crandall & Eshlemann, 2003).

The construct, which is assessed with a questionnaire (example items where an individual rates their support for the statements: “Some people are just inferior to others,” “To get ahead in life, it is sometimes necessary to step on others”) has gained a lot of attention and empirical support since its conception. Research has shown that SDO is correlated with different forms of prejudice and anti-equality attitudes. This means that people who are high on social dominance orientation also tend to be high on racism and sexism, have negative attitudes towards gay and lesbian rights, and do not support social welfare programs (Sidanius, Stallworth, & Malle, 1994).

However, SDO is not synonymous with other similar well-known attitudinal dimensions, like conservatism or authoritarianism. While there exists a strong correlation between these variables, studies such as the aforementioned one show that SDO remains a significant predictor of prejudicial attitudes even when controlling for the effects of related variables. This speaks to the complexity of exploring prejudice and discrimination – or any topic – in the field of psychology: It is unlikely that we will ever find an individual difference variable that accounts entirely for that way that people respond on a measure. Peoples’ beliefs and actions are a product of their upbringing, their surrounding environment, a host of personality characteristics, and even their physical and cognitive state. Studies show that people are more likely to report prejudicial thoughts when they are under cognitive stress (i.e. a mentally difficult task), suggesting that it takes cognitive effort to suppress prejudicial thoughts (Crandall & Eshlemann, 2003).

Interestingly, SDO has also been shown to be related to other parts of peoples’ lives besides their ideologies about social equality. One finding from Sidanius, Stallworth, and Malle (1994) was that SDO was related to participants’ occupational goals. Participants in one study, who were college students intending to work in hierarchy-enhancing occupations such as business or law, which served and protected primarily high status groups, had higher levels of SDO than participants who intended to work in hierarchy-attenuating occupations such as counseling, which served and protected a wider number of groups, even when controlled for sex (for which, in all but two samples, men scored higher than women on SDO).

Social dominance theory emerged about 20 years ago and it continues to generate insight today. However, to truly understand the topic of prejudice and discrimination, one must bear in mind that SDO is just one of many factors related to prejudice.

Milkman, K, Akinola, M., and Chugh, D. (2014). What happens before? A field experiment exploring how pay and representation differentially shape bias on the pathway into organizations. Social Science Research Network.