The 5 Stages of Grief and Grieving

Most of the time, we only become aware of our breath when there’s something wrong with it. Ranging from chronic lung illnesses to extraneous exercise, we generally only focus on breathing when we have to. But there is a whole system of thinking that puts the breath at center stage.

The well-known Buddhist monk and author, Thich Nhat Hanh, in his book, “Breathe! You Are Alive: Sutra on the Full Awareness of Breathing,” takes the reader on a tour of breathing from the Buddhist point-of-view. Unlike Western religions and philosophies, Eastern philosophies, such as Buddhism and various types of yoga and meditation, place a high value on the awareness of breathing.

“Breathing is a means of awaking and maintaining full attention in order to look carefully, long, and deeply, see the nature of things, and arrive at liberation,” Nhat Hanh writes. He later writes, “Our mind is the subject, and our breathing is the object. [W]e see that our breathing affects our mind, and our mind effects our breathing.”

Breathing – the act of slowly inhaling and exhaling – is mostly done automatically, without much thought or awareness. The type of methods promoted by Nhat Hanh, on the other hand, invites us to place our attention on the breath.

“Why is the breath so important?” one might ask.

Again, as stated above, Buddhists and other proponents of eastern philosophy believe that there is a real connection between our mind and our breath. Or, to put it another way, awareness is what we are attempting to achieve when we focus on our breath.

As Nhat Hanh puts it: “We are aware that we have the opportunity to practice meditation and that there is no moment as important as the present one. Calming abiding in the present moment, immense joy arises each time we touch in ourselves the seeds of faith, compassion, goodness, equanimity, liberty, and so on.”

In a place such as the United States and in the West in general, where mental conditions such as chronic anxiety and depression have run amok, conscience and deliberate breathing may be a way to help rein in our untamed minds. For example, one cognitive error called, “Catastrophic Thinking,” occurs when an individual always assumes the worst outcome in any given situation. One reason that this cognitive error may occur is because the person’s mind gives way a chain of negative thoughts, a seemingly unstoppable cascade of imagined poor outcomes. A more deliberate, conscience awareness of our thinking may help tame those wild thoughts.

To conclude, the conscience awareness of breathing is a tool that has been used for centuries in the East. Religions such as Buddhism and practices such as different type of yoga and meditation all place a high emphasis on the breath. Breathing is automatic, and we usually do not pay much attention to it most of the time. But when caught in a situation of a chain of negative thoughts, slowing down to breathe might be the key.

Finally, as Nhat Hanh puts it: “Mind is breath.” 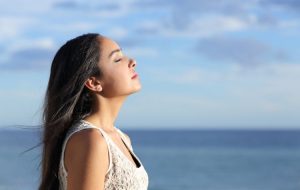