Since the election of President Donald J. Trump in 2016, a renewed debate of sorts has emerged – or re-emerged – about the practice of clinical psychologists, psychiatrists, and other mental health professionals (MHPs) diagnosing public figures, such as the President of the United States, celebrities, and the like, with a mental health disorder.

Just recently, George Conway, husband of the President’s advisor, Kellyanne Conway, tweeted out snapshots of the definition of several mental health disorders taken from the Diagnostic and Statistical Manual for Mental Disorders (DSM-5) with the implication that Trump may have one or several of these disorders. Conway, a lawyer, is not a practicing clinical psychologist, but his message was clear: Trump has a mental disorder in line with DSM-5 criteria.

Was this merely a public relations stunt, or is Conway on to something?

As noted by Judith Lewis Herman and Brandy X. Lee, “If we are mindful of the dangers of politicizing the professions, then certainly we must heed the so-called ‘Goldwater rule’, or Section 7.3 of the APA code of ethics, which states: ‘it is unethical for a psychiatrist to offer a professional opinion [on a public figure] unless he or she has conducted an examination and has been granted proper authorization for such a statement.” The authors continue: “The Goldwater Rule highlights the boundaries of practice, helps to preserve professional integrity, and protects public figures from defamation.”

There still isn’t a clear-cut consensus about how to resolve this ethical conundrum. For example, are public appearances, public statements, and behaviors enough evidence to diagnose a public figure with a mental health disorder? If the answer to this question is “Yes,” does this still risk politicizing the profession?

As long as Trump remains in office, questions about the Goldwater rule vs. the duty to warn are going to undoubtedly continue. 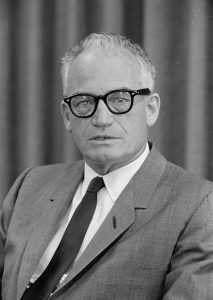