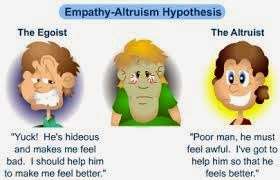 Taking a break from the biological perspective of our previous two blogs, this entry looks at a universally occurring social psychological phenomenon—namely, the possibility of committing a purely self-less act? Is the person who returns a large sum of found money doing it out of selflessness, to alleviate guilt, fear of being caught, or some other variable? What about the interpersonal acts of supposed altruism? Providing a monetary donation to a mendicant because they need help and you are altruistic, or because it may impress the date on your arm?

C. Daniel Batson is arguably the authority on pro-social behavior and motivational factors, specifically the topic at hand: the altruism-empathy debate. The altruism-empathy debate describes the phenomenon whereby individuals help another due to feelings of empathy for them, regardless of the gain/cost analysis. In this model, empathy is the motivational factor and not simply the need to alleviate a negative state of guilt, shame, etc.

In this early (1981) study, Batson et al. performed two experiments in order to test their hypothesis—contrary to the consensus of the past few decades of literature—that empathy does indeed stem from altruistic and not egoistic motivation. The researchers note from the outset the inherent difficulties with this task. Since altruism and egotism are motivational factors that can’t be directly observed, the experiment must be constructed and participants manipulated in such a way that the behavior can be measured. After a brief hiatus, providing the reader with operational definitions, Batson gets to the guts of the experiment.

The experiment contained a rigged lottery held to determine that the confederate (Elaine) be required to work a 10-trial task where participants are told she would receive random electrical shocks. Participants were informed that the purpose of the study was to gauge task performance under adverse conditions. Participants monitored Elaine’s progress on CCTV, and also had access to a galvanic skin response (GSR) monitor. During the course of the experiment, the assistant inquired about Elaine’s well-being. At this time Elaine disclosed that she had previously fallen on an electrical fence, that this experience was traumatic at the time and somewhat troubling now considering the nature of the experiment. Elaine insisted she would continue. The assistant would then ask the observer/participant if they would be willing to take Elaine’s place, so as to alleviate her suffering from the electrical shocks. The researchers found that almost all participants willingly traded places with Elaine when they knew (via questionnaires) that Elaine’s interests were similar to their own. Batson et al. presumed that empathy was elicited due to their commonly shared values and interests. Conversely, the participants that declined to aid Elaine, and instead left the situation after knowing that they did not share common values with her. Again, the researches presumed the low levels of empathy are attributable to their lack of commonality.

Most of the concerns I had while reading the article were addressed in the final, general discussion section: the fact that all the participants in both studies were all female, who were watching a same-sex confederate. Prior research has already shown females score higher on empathy than males. Further, only two experiments were conducted. Again, the researchers note the necessity of further research. My only other caveat would be the necessity to explore other motivational factors besides simply altruism vs. egotism. What about morality? Religious beliefs? Social responsibility? Negative state relief? Race? Other under-lying biases?

The notion of a pure sense altruism has been a philosopher’s playground for centuries. In fact, Batson himself notes the antiquity of the question in a later article (Batson, 1991). My already alluded to question for further research regards the possible plurality of motivational factors. I’m honestly not sure how to set up an experiment that would be simple enough to engage in, yet complex enough measure several motivational factors for altruistic behavior. In this vein, I found Van Lange’s (2008) research on the subject an interesting starting point inasmuch as he explored the activation of altruism in terms of egalitarianism (justice) and selflessness. Finally, and perhaps somewhat excitingly to those who enjoy research as much as I do, there is a vast bibliography on this topic. Batson’s references are the tip of the iceberg, but a good place to start researching the empathy-altruism hypothesis. Further suggestions for reading are listed below. Finally, whether your motivations stem from an enlightened and pure selflessness, being altruistic to others in need is always a good thing. 🙂