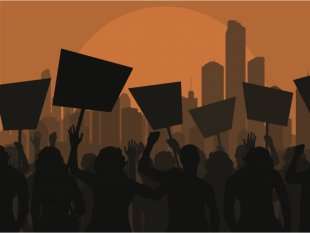 In 1951, a virtually unknown dock laborer in San Francisco published a book that would have a wide-ranging impact in psychology, politics and philosophy.

That book was “The True Believer” by Eric Hoffer.

Hoffer, who did not receive a formal university education, probed into the nature of mass movements, and pondered why anyone would give up his or her identity to join a mass movement. Writing in the post-WWII era, Hoffer remained troubled by the Nazi movement in Germany, as he sought to explore the mindset that leads to an individual joining a cult, religious or political movement.

“People allow themselves to be swept up in larger causes in order to be freed of responsibility for their lives, and to escape the banality or misery of the present,” writes Tom Bowdon, summarizing Hoffer’s work. Indeed, as Hoffer argues, many people join mass movements in order to discover a “deeper purpose” to their lives. Put simply, sometimes life can be boring, and becoming part of a larger cause negates this banality.

Mindset of “The True Believer”

Certain groups remain more susceptible to joining a mass movement, Hoffer argues. Groups such as the extreme poor make bad mass movement candidates, simply because they are too worried about day-to-day survival rather than larger, abstract causes. Other groups, such as college students or the middle class, by contrast, remain good candidates to join a mass movement.

Hoffer explains: “Our frustration is greater when we have much and want more than when we have nothing and want some. We are less satisfied when we lack many things than when we seem to lack but one thing.” As pointed out by Bowdon, Hoffer used the example of wealthy German industrialists in the run up to WWII. Apparently bored with their usual activities, Germany’s wealthy families may have found it “intoxicating” to become part of a mass movement.

Unlike most other works of popular psychology, Hoffer does not lay out a series of steps or stages. Unlike Maslow or Piaget, for instance, Hoffer does not argue that an individual must move through specific stages or phases before become a true believer. The author does argue, however, that—as noted above—some groups are more vulnerable to mass movement indoctrination, and, more importantly, “. . . a movement will attract those who dislike having to be responsible for their lives,” as noted by Bowdon.

The Promise of Glory

Many mass movements, whether religious in nature (the crusades of The Middle Ages) or political (the French Revolution, which began in 1789) tend to promise its adherents a glorious future. In fact, Hoffer spends considerable time on this point in “The True Believer.” Again, summarizing Hoffer, Bowdon writes: “[I]f our present life is considered worthless, and our belief in the movement is so great, it will not be such a lead to die for it.”

All moral considerations seem to be squashed by the “holy cause” (a phrase used by Hoffer) of the movement. In the mind of the true believer, the devoted adherent, all those who stand in the way of the movement’s goal may be “. . . weak, corrupt, without backbone or decadent.”

Several decades have passed since Hoffer first published “The True Believer,” but it has remained more relevant than ever. Few books of have had the impact of “The True Believer,” in that it has inspired psychologists, political writers and philosophers. Moreover, despite being inspired by the events of World War II, Hoffer’s work seems to remain eerily relevant to the events of today in areas such as the Middle East. “What makes someone want to die for a cause?” “What groups are vulnerable to indoctrination?” “What mindsets, ideologies or beliefs promote harm on a wide scale?”

All of the answers to these questions are multi-causal, but Hoffer’s work establishes a strong starting point. Finally, despite (or because of) Hoffer’s lack of formal education, he cultivated a unique perspective that one can only view with envy. As noted by Bowdon: “The book is also a great example of why questions of human motivation and action should never be left to psychologists alone.”

Bowdon, T. (2007). 50 psychology classics who we are, how we think, what we do : Insight and inspiration from 50 key books. London: Nicholas Brealey Pub.