In our increasing technological age, and emphasis, some argue, has been on our visual experiences rather than our auditory experience. “The dominance of the visual has in fact dulled all of our other senses,” writes author Trevor Cox. As it turns out, although the visual experience remains prominent, the process of breaking down sound and how this psychological systems work is – well – very interesting.

In his book, “This Is Your Brain on Music,” Daniel J. Levitin discusses how sound, specifically music, and our perception of music, is encoded in our brains by things like a person’s sense of time, pace, and pitch. And this is by no means a recent phenomenon. “Music is unusual among all human activities for both its ubiquity and its antiquity,” Levitin observes. No known human culture now or anytime in the recorded past lacked music.” The author continues: “Some of the oldest physical artifacts found in human and protohuman excavation sites are musical instruments: bone flutes and animal skins stretched over tree stumps to make drums.”

On a psychological level, discerning something like rhythm becomes a foray into the human brain and how it works, so says Levitin. Take the beat of a drum or tapping of your foot. Even if a person doesn’t have a musical muscle in his or her body, generally speaking, all humans have the ability to perceive “meter,” which “refers to when you tap your foot hard verses light.” In other words, meter in musical parlance, is simply the emphasis given to some beats and the deemphasis given to others. Meter can be can thought of in a beat such as:

Most interestingly, meter, according to Levitin, is purely a psychological phenomenon. A simple experiment to test this is to buy a metronome (a device musicians use to keep time while practicing) and program a rhythm without emphasis on one beat or another. Within the robotic ticking, your brain will start to emphasis certain beats over others, hearing something such as weak, STRONG, weak, STRONG and so on.

Another musical area that our brains help construct is the idea of loudness. “When you’re adjusting the output of your stereo system, you’re technically increasing the amplitude of the vibrations of molecules, which in turn is interpreted as loudness by our brains,” writes Levitin. He continues: “Loudness is measured in decibels and it is a dimensionless unit like a percent; it refers to a ratio of two sound levels.” In other words, what Levitin is saying, is that the concept of “loudness” is a relative concept, although is can be measured preciously.

Meter and loudness are only two of many, many different ways our brains help construct the sonic world around us. There are many others, and it remains fascinating that something we can enjoy so much – music – has deep psychological roots that most of us are not always aware of. 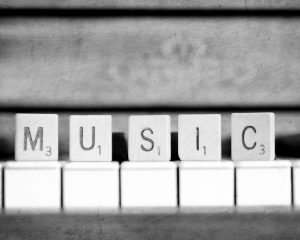