This past Saturday, June 20, was the summer solstice. That date marks the first day of summer, and it is also the longest day of the calendar year. From that date forward, the sunlight is at its zenith, and we will begin to experience less and less daylight, although it’s not usually perceptible for several weeks after the summer solstice.

“Although the best of summer is usually yet to come, the summer solstice marks the height of the Sun’s powers on the longest day of the year,” writes author Ann-Marie Gallagher. “[T]he moment we celebrate the Sun’s powers at their greatest is the very moment those powers begin to wane.”

More than just an astrological event, the summer solstice – as well as the winter solstice, the spring and autumn equinoxes, and other events of the year – has a storied history of legend, lore, and traditions. For example, author Deborah Blake notes that “J. R. Tolkien used the word ‘Litha’ for a Midsummer festival in his Lord of the Rings Trilogy,” and “Shakespeare used [the summer solstice] as the basis of one of his most popular plays, A Midsummer Night’s Dream.”

Put simply, the summer solstice is a time for celebration.

“Historically, [the summer solstice] has been observed in virtually every culture in the world at one point or another,” writes Blake.

Sometimes called “Midsummer” or “Litha,” the summer solstice “. . . was an especially joyful holiday because in most places it marked the end of the planting season and the beginning of the earliest harvest,” Blake writes.

Midsummer was an especially important event historically in the British Isles.

“Neolithic stone monuments found throughout Europe that align with the Sun on this day – in both Celtic and non-Celtic lands – indicates that the Summer Solstice was indeed significant to our ancient ancestors,” writes author Lisa Chamberlin. “The most well-known example is Stonehenge in England, where from the center of the circle, the midsummer Sun can be seen rising over the giant Heel Stone.”

Moreover, author Edain McCoy writes: “Because of the sun’s obvious role at midsummer, this was a time of fire rituals and fire magic throughout western Europe, and balefires still figure prominently in modern midsummer rites.” The author goes on to say: “The Celts [for example], would light balefires all over their lands from sunset the night before midsummer until sunset the next day.”

To conclude, the summer solstice is a time of celebration and sunshine. It is a day that has ancient roots, a day the marks the lightest day of the year while, at the same time, marks the gradual decline of light throughout the year. 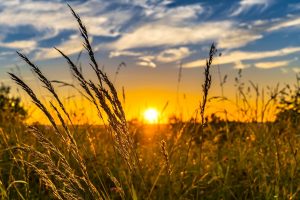