As authors Marco Mencagli and Marco Nieri point out in the introduction of their 2019 book, “The Secret therapy of Trees,” “In the United States, over 80 percent of the population lives in urban or suburban areas.” Moreover, since the Industrial Revolution began more than 100 years ago, people and families have been migrating from a rural lifestyle to an urban one. This trend has also been continuing throughout the rest of the globe, as more third world communities move from underdeveloped to developed.

Taking the big picture into account, however, it is important to remember that the trend from rural to urban has taken place in a very short span of time when placed within the larger context of human history.

“[T]he genus Homo has existed on Earth for 2.3 to 2.4 million years,” writes Mencagli and Nieri. And “[t]he species Homo sapiens formed just under two hundred thousand on the content of Africa. . .” The authors go on to make the case that for almost our entire history, humans have lived in an environment surrounded by nature, and, more specially, in an environment surrounded by trees.

“[M]an as a species has spent 99.5 percent of his evolutionary time in completely natural environments,” the authors point out.

Apart form the evolutionary context, recent research has suggested that there are therapeutic and regenerative aspects of being in a natural environment. As Mencagli and Nieri report, “over one hundred studies on the health impact of forest bathing and similar practices appear in the PubMed research database.” Some of those positive effects include the endocrine, circulatory, respiratory, digestive, and immune systems.

Part of this can be explained by a person’s “. . . innate tendency to prefer natural places,” which is called “biophilia.” “The concept of biophilia represents the idea that human beings, having evolved in places on the planet rich in plant and animal species, possess a deep biological attraction to what we identify today with the generic term ‘nature.’”

This also includes sound pollution, which can reduce the experience of being outdoors.

Again, the positive effects are not limited to the United States and other western countries. As Mencagli and Nieri point out, “[I]n 1982 the Japanese forest service inaugurated shinrin-yoku, which is the full-immersion journey into the forest atmosphere. In English, this term is translated as ‘forest bathing trip,’ or simply “forest bathing,’ which can be defined as entering and ‘soaking up’ a forest environment.”

Finally, if you are feeling down, talk a walk outside and soak up nature. It only takes a few minutes to gain the benefits of the therapy of trees. 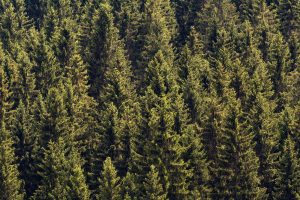