Welcome to December, the darkest month of the year.

Despite the dark and cold of December, the month actually has a long history of celebration, spanning back to the ancient world. In ancient times, there was a festival called “Midwinter,” a time near the Winter Solstice, which normally occurs around December 21.

“The word solstice itself comes from the Latin sol stetit, literally ‘sun stands still,’ which recognizes that for six days in June and again in December, the sun appears to rise and set at more or less the same point on the horizon, appearing to stand still in the sky,” write author John Matthews. He continues: “For people of the old world, the solstices effectively divide the year in two, a dark half and a light half.”

In fact, this sentiment was summed up properly by the 16th century English poet, John Donne, when he called the Winter Solstice “the year’s midnight.”

Beyond the astrological event, the Winter Solstice is surrounded by myth and folklore. Ancient peoples in Northern Europe, Egypt, and the Middle East had different belief systems entirely; however, when it came to the Winter Solstice, each culture would celebrate the longest night of the year in one way or another. In the Roman Empire, for example, the festival of “Saturnalia” was celebrated, “right up to the fourth century,” Matthews writes. Even the contemporary image of Santa Clause contains elements of the ancient past, echoing images of shaman and other holy men throughout North America and Europe.

The month of December also welcomes the “Cold Moon” each year.

“In the thick darkness of winter, the Cold Moon rises, a glowing orb casting an eerie light on the earth below,” writes author Alison Davies. Aptly named after the drop in temperature at this time of year, the Cold Moon is also known as the Long Night’s Moon, because of the lengthy period it appears above the horizon.”

One particular ancient festival that is still celebrated today is Yule. “[This day] marks the longest night and the shortest day, and the return of the sun,” Davies explains.

Yule and Midwinter are the predecessors to our modern Christmas. One reason we have Christmas trees, for instance, is because firs and other species of evergreen trees we often looked upon at this time of year as a symbol of nature, and the green landscape that is now lying dormant. Finally, this is naturally a good time of year to reflect and get ready for the new year. 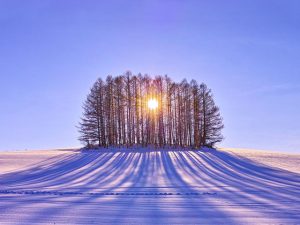