It is common – and almost natural – for many people to project and think about their futures: What type of job will I have? Will I be married or not? Where will I live?

Having thoughts such as these help us set goals, plan, and image the lives we want to live.

“Little research has been conducted as to how far older and younger adults extend their self-images into the future, that is, their imagined future selves, such as imagined future family roles, future hobbies, or future traits,” the authors of the abovementioned study write.
According to this study, there are different ways people think about their futures.

“According to one line of research,” the authors write, “we should expect aging to be associated with changes in future time perspective, such that older adults perceive their futures as more limited and less central compared with younger adults. According to another view, the distance with which individuals project themselves into the future may not simply be a function of age-related changes in perspectives, but may be formed by age-independent cognitive and motivational constraints.”

So, in other words, current age plays role in how we image our future selves. Interestingly, the authors of the study found “that participants concurred on a surprisingly short future horizon, dating their future self-images within the ﬁrst 5 to 10 years from their present, irrespective of any demographic factor. The ﬁndings also revealed that all age groups generated considerably more positive future images and that these were closer to their present whereas negative ones were pushed further into their future.”

Generally speaking, then, people tend to have a more positive view of their own futures.

Yet one reason why older adults may not project as far into their futures is because they have more years and experiences to draw upon, which affects the way they view things, as the authors mention.

“[Previous studies] found that as people age, memories of events extend further back in time, whereas the events they imagine in the future draw closer to the present,” the authors write. [Other researchers] showed that young adults report possible autobiographical future events further in time (on average, 2.6 years into their future) in comparison with older adults who provide future events closer to their present (on average, 0.3 years into their future).”

To conclude, current age may have an impact of how we view our future selves. Additionally, according to the study described above, it appears that nearly all people image themselves in the future. I guess the key question is: What type of future do you see yourself having? 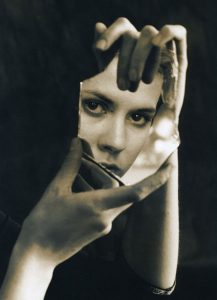