Verbal abuse can be hard to detect sometimes.

But in many other instances, verbal abuse is detrimental to its victims as well as for those committing the abuse.

“Verbal abuse is a kind of battering which does not leave evidence comparable to the bruises of physical battering,” writes author Patricia Evans. “It can be just as painful, and recovery can take much longer.”

Verbal abusers may also resort to name calling and attempts to humiliate the victim. As pointed out by Evans, “Verbal abuse may be overt, such as an angry outburst directed at the partner or an attack along the lines of ‘You’re too sensitive.’” The author continues: “Verbal abuse by its very nature undermines and discounts its victim’s perceptions. . . If the words or attitude disempower, disrespect, or devalue the other, then they are abusive.”

If you or someone you know is in a verbally abusive relationship, seek professional help from a licensed mental health professional. 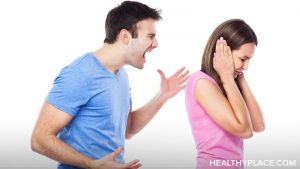