What is the ‘Dunning-Kruger Effect’?

How ‘Situational Awareness’ Can Keep You Safe

‘Wintering: The Power of Rest and Retreat’

What is the ‘Dunning-Kruger Effect’?

The human brain has its biases.

And cognitive biases come in all shapes and sizes, including the human brain’s ability to want to avoid ambiguity to our personal need for uniqueness. But when it comes to cognitive biases, one of the most interesting and seemingly common bias is the Dunning-Kruger Effect.

One of the things that make the Dunning-Kruger Effect interesting is that it may be an easy cognitive bias most people can spot. You may recall a situation in high school sports, for instance: A fellow team members brags endlessly about how good he or she is at a game, only to discover later that that person isn’t very good at the game at all. Or, perhaps someone in the office you work at may claim expertise in many areas, and, again, it is learned later on that the person who was boasting is only good at only some of the things they claimed.

If so, this is the Dunning-Kruger Effect at work.

Or, if you yourself may feel guilty to making baseless boasts about your own skillset in a particular area of expertise, then, also, you are prone to committing this cognitive error.

When it comes down to it, the Dunning-Kruger Effect is really about expertise.

Unfortunately, certain philosophies that had emerged in the mid- and late-20th century would lead one to believe that everyone can be an expert at the same thing (relativism), or that no there’s no such thing as expertise (post-modernism), or, finally, one may recognize expertise but he or she may choose not to acknowledgment (ignorance). In our social media-driven platforms, in which we only see the information we want to see, this, of course, leads to a proliferation of the Dunning-Kruger Effect.

One way to guard against if you yourself are committing the Dunning-Kruger Effect is to do an honest assessment of what you may know or are skilled at, and what you may not know or are not skilled at. In a similar cognitive bias, “groupthink,” which occurs when a group of people convince themselves that their decisions are just, necessary, or even “right,” it is suggests that in order to avoid this bias, groups are encourage to include a “devil’s advocate,” or a person who may disagree or challenge a given decision so that the group remain more neutral.

This strategy, of course, may be applied to the individual so that he or she avoids the Dunning-Kruger Effect, or, in other words, avoids overestimating their own abilities or expertise.

This may be easier said than done, however.

Finally, by pushing ourselves to be more honest with others and ourselves, we are taking a step toward committing the Dunning-Kruger Effect. 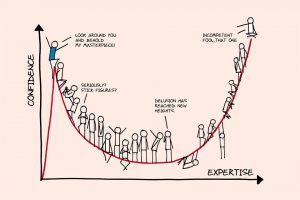