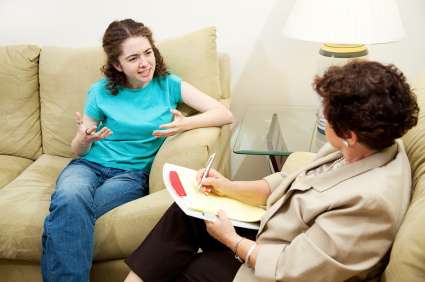 Teen girl expressing frustration in a session with her therapist.

There’s this idea floating around that only people with serious mental disorders go for therapy. I’m not entirely sure where this notion comes from – I would theorize it comes from historical events, where the most salient examples of mental health care are linked to cruel and abusive asylums for individuals with severe pathologies, but that doesn’t seem so likely considering the prominent examples of figures like Freud, whose main clients were the upper-crust of Austrian society. Whatever its origins, we need to have a talk here –it’s wrong.

So who does go to therapy? Everybody. Well, at least one person from 48% of households, which isn’t everybody, but it’s still a very large proportion of the population. The American Psychological Association (this really, really, really big and important organization for psychologists) did a very big poll and found that close to 50% of households had at least one person who sought out mental health treatment within the past year (2004). Another study found that 27% of adults had sought out mental health treatment in the past two years (Howes, 2008). This means that many people have gone for therapy, or know someone who has.

However, this doesn’t mean that a quarter of the population suffers from something like schizophrenia or, or even “clinical depression” (Major Depressive Disorder, as it’s called in the DSM, this really, really, really big and important book for clinical psychologists that’s sort of like the definitive guide to disorders). Granted, it is quite common for people with Major Depressive Disorder or Generalized Anxiety Disorder to go to therapy, but one need not have a DSM diagnosis to go see a therapist. People who are feeling in a slump, are worried over their schoolwork, relationships, or work, or are having conflicts with their family or romantic partners – none of these issues are necessarily severely distressing and distracting in one’s life, but they are still problems and points of stress, which are valid reasons for seeking out help.

When we talk about “mental health professionals,” we’re talking about a lot of different kinds of people. There are psychologists and psychiatrists, who deal with testing, disorders, and medication, and then there are counselors and social workers, who often deal with more general life issues. Counselors and social workers are much different from “life coaches” – they have clinical training in their fields just as psychologists do. For this reason, someone who is having general problems in their life, whether those problems are emotional or social, may elect to see a counselor.